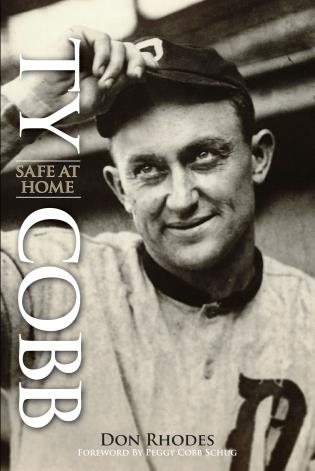 Distantly related to a Confederate general, Ty Cobb was a strapping Augusta youth who became a star for the Detroit Tigers. Long revered as a great hitter and an incredibly fast baserunner, Cobb often has been remembered as a hated athlete, a bitter man who died nearly 50 years ago. No biographer has explored the complex personality as deeply and meticulously as Don Rhodes in his new comprehensive biography. Rhodes reveals the man as Cobb was in Augusta: in the off season and as a retiree. For the first time, a biographer includes interviews with Cobb's two daughters (whom Rhodes met before they died), his granddaughter, and close friends, who offer insight and photos of Cobb's private life never seen before. Many of Cobb's emotional troubles started early in life, and no doubt were compounded during his early seasons with the Tigers, when his mother went on trial for murdering his father. The ugly side of this phenomenal athlete is not defended or explained away, but readers learn to better understand a man who seemed so miserable, when he had so much.

Don Rhodes is an editor at Morris Communications in Augusta. He has written “Ramblin' Rhodes,” a music column, for more than 37 years, and his byline appears in many magazines and newspapers. He lives in North Augusta, South Carolina.

DON RHODES is publications editor of Morris Communications Co. based in Augusta, Georgia. He is also known for Ramblin' Rhodes, the longest running country music column in America, now in its 37th year. His articles have appeared in many daily newspapers and national magazines, and he has been nominated several times to the Georgia Music Hall of Fame in the non-performer category. Don lives in North Augusta, South Carolina.