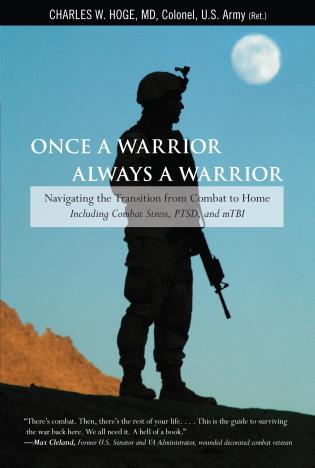 Once a Warrior--Always a Warrior

Navigating The Transition From Combat To Home--Including Combat Stress, Ptsd, And Mtbi

The essential handbook for anyone who has ever returned from a war zone, and their spouse, partner, or family members.

Being back home can be as difficult, if not more so, than the time spent serving in a combat zone. It's with this truth that Colonel Charles W. Hoge, MD, a leading advocate for eliminating the stigma of mental health care, presents Once a Warrior—Always a Warrior, a groundbreaking resource with essential new insights for anyone who has ever returned home from a war zone.

In clear practical language, Dr. Hoge explores the latest knowledge in combat stress, PTSD (post-traumatic stress disorder), mTBI (mild traumatic brain injury), other physiological reactions to war, and their treatment options. Recognizing that warriors and family members both change during deployment, he helps them better understand each other's experience, especially living with enduring survival skills from the combat environment that are often viewed as “symptoms” back home. The heart of this book focuses on what's necessary to successfully navigate the transition—“LANDNAV” for the home front.

Once a Warrior—Always a Warrior shows how a warrior's knowledge and skills are vital for living at peace in an insane world.

Col. Charles W. Hoge, M.D., Colonel U.S. Army (Retired), served as Director, Division of Psychiatry and Neuroscience at Walter Reed Army Institute of Research from November 2004 until his retirement in summer 2009. Since 2000, Colonel Hoge has directed a comprehensive research program at the Walter Reed Army Institute of Research (WRAIR) focused on mitigating the mental health impact of the current wars in Iraq and Afghanistan. His program has been responsible for the Mental Health Advisory Team (MHAT) assessments in Iraq and Afghanistan, research that led to the DoD Post-Deployment Health Reassessment Program, and the development of novel educational efforts to reduce stigma and promote psychological health after deployment, including Battlemind Training. In addition, he maintains a clinical practice caring for soldiers and family members with war-related mental health conditions.

Col. Hoge is also a national spokesperson for the Department of Defense (DoD) on war-related mental health issues and traumatic brain injury. He has been interviewed on hundreds of occasions by major news organizations on camera, radio, or in print, including NBC, CBS, ABC, CNN, C-SPAN, NPR, Reuters, AP News, New York Times, Washington Post, USA Today, Newsweek, and numerous others, including the Diane Rehm Show, the Paula Zahn Show, and the Dr. Oz Show.

He has published over 90 peer-reviewed articles, letters, and chapters. His most widely cited articles pertain to the mental health impact of the wars in Iraq and Afghanistan and to mild traumatic brain injury among U.S. troops returning from Iraq.