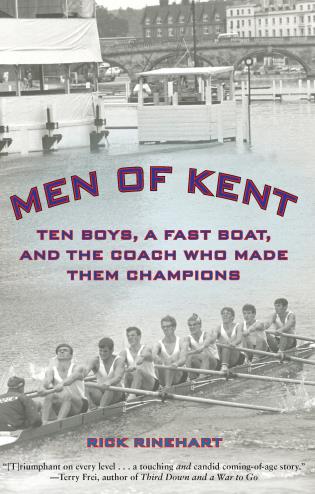 Ten Boys, A Fast Boat, and the Coach Who Made Them Champions

Men of Kent is, first and foremost, an archetypical sports tale—a story of the improbable happening to the unlikely, unfolding against the backdrop of a turbulent era. Both an homage and a unique inside look at the fast-growing sport of rowing, it embraces the sport's history, traditions, and culture as it tells the story of ten ordinary boys and their coach from , who found themselves in extraordinary circumstances during the spring and summer of 1972.

The 's 1972 crew, of which the author was a part, had a 46-0 winning streak, broke three course records, and claimed a national championship. In its final race, at the fabled Henley Royal Regatta in —a race broadcast on television worldwide—it barely edged the Canadian National Champions. 's achievement merited a banner headline in the New York Times sports section, and is regarded as one of the most breathtaking finishes in 's long history.

Rick R. Rinehart is the author of three books, the most recent of which he coauthored with his wife, Dare to Survive: Death, Heartbreak, and Survival in the Wild. In 2006 he was elevated to membership in the Leander Club (Henley-on-Thames, England), the world's oldest, largest, and most successful rowing club.