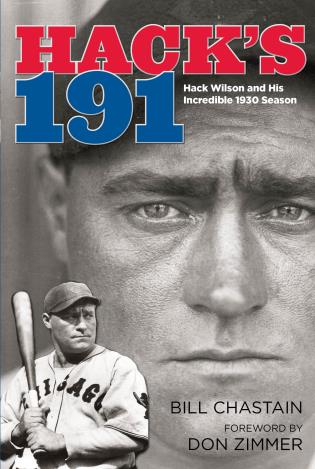 Hack Wilson And His Incredible 1930 Season

Hack Wilson’s record 191 RBIs in 1930 may well stand the test of time, and so may the record of his hard-drinking lifestyle. In Hack’s 191, Bill Chastain recreates the most productive offensive season in baseball history while giving readers unique insight into the life of one of baseball’s most fascinating, enigmatic, and yet neglected characters.

Drunk or sober, Wilson lived large in Prohibition-era Chicago, where the entertainment and nightclub industries thrived, and Al Capone, a friend of Wilson, reigned as the most publicized gangster in America. Hack finished the 1929 season batting .345 with 39 home runs and 159 RBIs, giving him his fourth consecutive 100-plus RBI season before for misplaying two fly balls in the World Series. Despite losing the Series, the Cubs entered the 1930 season favored again to win the National League pennant. After a slow start and many bad breaks, the team was in first place by the end of August, with Hack Wilson leading the way. Chronicling the ups, downs, and record-setting accomplishments of Lewis R. “Hack” Wilson, this book returns arguably the most hard-living, hard-hitting ballplayer in history to the lineup of the game’s greats.

Bill Chastain began his journalism career as a Tampa-based freelance writer, writing stories for publications such as Nation’s Business, SPORT Magazine, Baseball Digest, The Sporting News, Tampa Bay Business Journal, and Inside Sports, before working as a reporter for The St. Petersburg Times and The St. Petersburg Evening Independent. Chastain went to the Tampa Tribune in 1990 and worked for twelve years as a columnist and sports reporter, during which time he also served as a correspondent for Sports Illustrated.

Chastain worked as an adjunct professor at the University of South Florida, teaching magazine journalism, and has gained a high profile in the Tampa Bay area through radio and TV appearances and various speaking engagements. Currently he works for MLB.com covering Major League Baseball’s Tampa Bay Rays.

Chastain is the author of The Steve Spurrier Story: From Heisman to Head Ball Coach, a biography of the former University of Florida and Washington Redskins football coach; The Streak, a baseball novel; Payne at Pinehurst: The Greatest U.S. Open Ever, a narrative about the 1999 U.S. Open played at Pinehurst and won by the late Payne Stewart; Steel Dynasty: The Team that Changed the NFL, about the Steelers dynasty coached by Chuck Noll; and Purpose and Passion: Bobby Pruett and the Marshall Years. Chastain lives in Tampa, Florida.