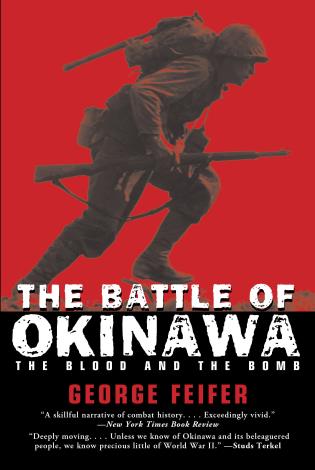 The Blood And The Bomb

More people perished during the battle of Okinawa than in the ensuing bombings of Hiroshima and Nagasaki combined. The Battle of Okinawa offers a stunning account of the last major campaign of World War II and the largest land-sea-air engagement in history. Superbly researched and extraordinarily detailed, this masterpiece of military history is told at the level of the participants themselves, soldiers and civilians alike. In examining the disastrous collision of three disparate cultures—American, Japanese, and Okinawan—this book provides an unforgettable picture of men at war and also the context for understanding one of the most ominous events of this century: the decision to drop the atomic bomb.

George Feifer is the author of many successful books, including The Battle of Okinawa, originally published as Tennozan: The Battle of Okinawa and the Atomic Bomb, and a New York Times Notable Book; Moscow Farewell, a Book of the Month Club Main Selection; and The Girl from Petrovka, the basis of a Hollywood film. He has worked as a journalist, novelist, and translator in the United States, England, and the former Soviet Union. He has written for a wide variety of publications, including the New Republic, the New York Times Magazine, Harper's, and the Saturday Evening Post. He lives in Roxbury, Connecticut.