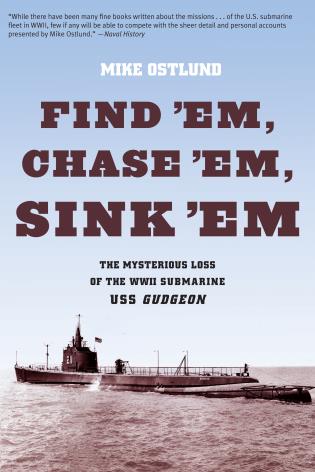 The Mysterious Loss Of The WWII Submarine USS Gudgeon

Now in paperback, revised and updated, the stirring and authoritative account of one of World War II's most highly decorated submarines

Find 'Em, Chase 'Em, Sink 'Em is the first book to recount the tragic and mysterious loss of the World War II submarine USS Gudgeon. In April 1944, the highly decorated submarine USS Gudgeon slipped beneath the waves in one of the most treacherous patrol areas in the most dangerous military service during World War II. Neither the Gudgeon nor the crew was ever seen again.

Author Mike Ostlund's “Uncle Bill,” the operator of a farm implements business, was aboard that ship as a lieutenant junior grade. Through extensive research of patrol reports in U.S. and Japanese naval archives, interviews with veterans who had served aboard the Gudgeon before its final patrol, and the personal effects of the lost men's relatives, Ostlund has assembled the most accurate account yet of this remarkably successful submarine's exploits, of the men aboard from steward to captain, and of what we now know about her demise. Find 'Em, Chase 'Em, Sink 'Em details the memories and life lessons of the young men who went to sea aboard Gudgeon before its last patrol knowing hardly anything, and came home having seen too much.

Mike Ostlund holds a masters degree from the University of Iowa. He is a member of the Naval Submarine League, an associate member of the United States Submarine Veterans, and an honorary research affiliate of NUMA Australia. He lives with his family in Iowa City, Iowa.