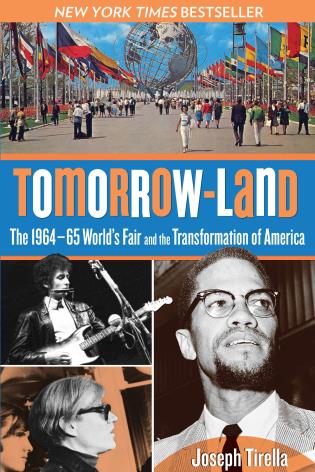 The 1964-65 World's Fair And The Transformation Of America

Motivated by potentially turning Flushing Meadows, literally a land of refuse, into his greatest public park, Robert Moses—New York's "Master Builder"—brought the World's Fair to the Big Apple for 1964 and '65. Though considered a financial failure, the 1964-65 World' s Fair was a Sixties flashpoint in areas from politics to pop culture, technology to urban planning, and civil rights to violent crime.

In an epic narrative, the New York Times bestseller Tomorrow-Land shows the astonishing pivots taken by New York City, America, and the world during the Fair. It fetched Disney's empire from California and Michelangelo's La Pieta from Europe; and displayed flickers of innovation from Ford, GM, and NASA—from undersea and outerspace colonies to personal computers. It housed the controversial work of Warhol (until Governor Rockefeller had it removed); and lured Ken Kesey and the Merry Pranksters. Meanwhile, the Fair—and its house band, Guy Lombardo and his Royal Canadians—sat in the musical shadows of the Beatles and Bob Dylan, who changed rock-and-roll right there in Queens. And as Southern civil rights efforts turned deadly, and violent protests also occurred in and around the Fair, Harlem-based Malcolm X predicted a frightening future of inner-city racial conflict.

Joseph Tirella wrote about Queens for The New York Times’s much-missed City Section, and penned pieces for the paper’s Metro and Business Sections.  He has been a contributor to Portfolio.com and MSN.com, where he wrote about the arts and business. He was a Senior Editor at Fortune Small Business, where he was in charge of the magazine’s Off Hours section, as well as contributing features and editing cover stories. His work has also appeared in People, where he wrote and reported stories on a vast array of topics, including the paparazzi who chased Princess Diana in her last hours, the reemergence of Tawana Brawley and an exclusive three-hour interview with the late Christopher Reeve and his wife Dana, at their Westchester home. His work has also appeared in Rolling Stone, Vibe, Esquire, Reader’s Digest, the New York Post, and the Daily News among other publications. He lives in Queens with his family.