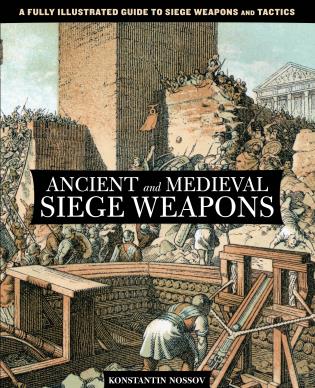 A Fully Illustrated Guide To Siege Weapons And Tactics

In this richly illustrated guide, author Konstantin Nossov masterfully analyzes and recreates the weaponry, tactics, and stratagems of the ancient world. He offers first a comprehensive history of siege warfare in Ancient Egypt, Assyria, Judea, Persia, Greece, and Rome as well as Gaul, the Byzantine Empire, the Muslim world, and Medieval Europe. Discover, among other weapons, how scaling ladders, battering rams, borers, siege towers, throwing machines, and finally cannons developed over time. Numerous charts, illustrations, photographs, and tables explain how engineers constructed and adjusted these weapons and how warriors employed them on the battlefield. Chapters on methods of attack and defense show the weapons in action and reveal the various strategies used to implement and to overcome them. Based on an in-depth analysis of the work of ancient engineers, historians, and generals—including Apollodorus, Herodotus, Julius Caesar, Leonardo da Vinci, Livy, Plutarch, Thucydides, Vitruvius, and others—Ancient and Medieval Siege Weapons not only shows you how to recreate the siege weapons themselves but provides a deeper, clearer picture of the history of war.

Konstantin Nossov earned his Ph.D. from the Moscow State University in Russia. He is a researcher and advisor on ancient and medieval arms, armor, and warfare as well as the author of numerous books and articles, including Gladiator (Lyons, 2011). His work focuses particularly on the history of weaponry, fortification, and siege warfare. He lives in Moscow.