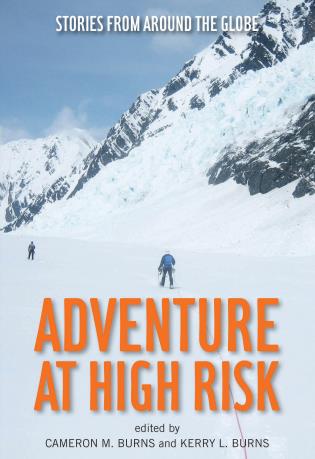 Stories from Around the Globe

A collection of some of the world’s

Anyone with a thirst for adventure and a courageous spirit will be captivated by the tales of endurance, determination, strength of mind, and perseverance recounted in this outstanding compilation. The stories in this book, be they fact or fiction, represent some of the most gripping and illuminating writing ever penned on the subject of adventure from across the globe. From straightforward narratives to spiritual reveries, adventure prompts men and women to pour forth essays, articles, and books that are unlike any other field of literature. Editors Kerry L. Burns and Cameron M. Burns showcase the amazingly vast spectrum that adventure literature offers.
With contributions by:
Matt Gerdes
Linus Lawrence Platt
Robyn Davidson
Jon Turk
Cameron M. Burns
Doug Peacock
Peter McBride
Stephen Venables
Roger W. Brucker
Richard A. Watson
Chris Davenport
Jonathan Waterman
John Ackerman
Dean Cummings
Christina Dodwell
Edmund Stump

Kerry L. Burns grew up in Tasmania. As a geologist, in the 1950s and 1960s he explored the Tasmanian wilderness, the Australian outback, and Cordillera Darwin in Tierra del Fuego in South America. His experiences in the coal industry of Australia and the United States led him to look for alternate sources of energy, and at Los Alamos National Laboratory, he participated in the Hot Dry Rock geothermal projects at Fenton Hill, New Mexico and Clear Lake, California. He is currently a geothermal energy consultant for projects in Australia, Europe and North America.
Cameron M. Burns is a climber, writer, and editor based in Colorado. He has been writing about environmental, green architecture, energy, and sustainability issues since the late 1980s as a reporter/correspondent/columnist with dozens of newspapers, magazines, and websites. He is an editor of The Essential Amory Lovins (Earthscan, 2011), coauthor of Building Without Borders (New Society Publishers, 2004), Writing, Etc. (Colorado Authors League, 2006), and Contact: Mountain Climbing And Environmental Thinking (University of Nevada Press, 2008), and author, coauthor, and contributor of more than two dozen books about the outdoors, mostly climbing.