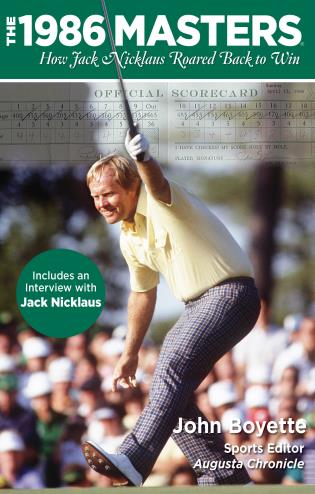 How Jack Nicklaus Roared Back To Win

At the age of forty-six, Jack Nicklaus was considered by some to be done as a championship golfer. Entering the 1986 Masters, most folks had written off the Golden Bear. But the winner of a record seventeen professional majors wasn't done yet. After a slow start, Nicklaus got in the hunt during the weekend, and he played the final nine holes in a 6-under-par 30. He roared past a who's who of top golfers that day to win his sixth Masters title—a record that still exists. Most experts agree that it was the most thrilling day of tournament golf ever played.

Upon the twenty-fifth anniversary of arguably the most exciting Masters in history, THE 1986 MASTERS is nearly a hole-by-hole account written by a veteran sports journalist who was there. Illustrated with more than fifty exclusive photographs of the tournament from the award-winning team at the Augusta Chronicle, it takes you right onto the course with the golfers. Author John Boyette includes commentary from interviews with the key figures connected to the 1986 Masters. From Nicklaus's wife and son to CBS announcers to the players themselves—Greg Norman, Tom Kite, Bernhard Langer, Sandy Lyle, Seve Ballesteros, and many more—an amazing chorus of voices that helps tell this remarkable story.

And the voice of Jack Nicklaus shines as well, in an interview provided exclusively for the book.

John Boyette is the sports editor at the Augusta Chronicle. He has covered twenty-three Masters® Tournaments and has directed the Augusta Chronicle’s award-winning coverage of the tournament since 2001. As a twenty-year-old junior at the University of South Carolina working part time for his hometown newspaper, the Aiken Standard, he was offered a chance to help cover the 1986 Masters® Tournament. With no specific assignment, and being a fan of Jack Nicklaus, he decided to follow him exclusively for Sunday’s final round. The result was an afternoon he will never forget. He won a statewide award the next year for his recounting of Nicklaus’s win, and his journalism career was launched. He lives in Aiken, South Carolina, with his wife, Kathy.