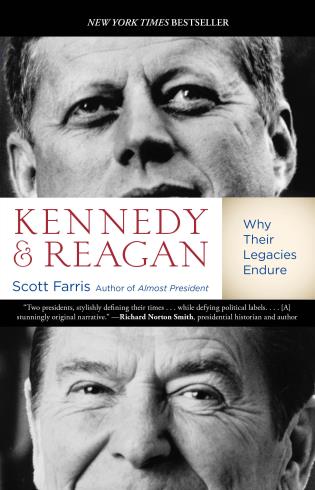 Why Their Legacies Endure

It’s been more than fifty years since JFK’s assassination and a quarter century since Ronald Reagan left the White House, yet the two men remain the beaux ideals of what the left and the right believe a president should be, and of how a president should look, sound, and act. But has popular memory, in service to contemporary causes, distorted what the legacies of each man actually are?
In Kennedy and Reagan, acclaimed political historian Scott Farris offers a comparative biography that explores Kennedy’s and Reagan’s contemporaneous lives from birth until 1960, showing how the experiences, attitudes, and skills developed by each man later impacted his presidency. Tackling key issues of each president’s time in office—civil rights, religion, nuclear brinkmanship, etc.—he also considers how their dealings around each issue compare and contrast. Ultimately, Kennedy and Reagan provides examines why the American public consistently ranks Kennedy and Reagan among the greatest presidents in history, an assessment shared by pundits and politicians, while historians do not.

Scott Farris, a former bureau chief for United Press International and a political columnist, has interviewed most of the men and women who have sought the presidency over the past thirty years, and has managed several political campaigns. He appeared on the 2011 C-SPAN television series The Contenders, and has appeared on MSNBC’s “Morning Joe” and “Melissa Harris-Perry.” His work has been published in The New York Times, Washington Post, and Wall Street Journal. He lives in Portland, Oregon, with his wife and two children.