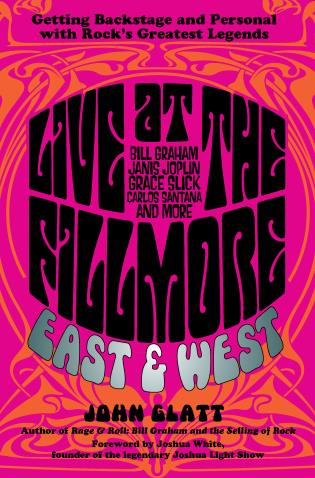 Live at the Fillmore East and West

Getting Backstage and Personal with Rock's Greatest Legends

In 1968, rock promoter Bill Graham launched the Fillmore East in New York City and the Fillmore West in San Francisco, changing music forever. For three years, every major rock band played the Fillmores, performing legendary shows: Jimi Hendrix, the Grateful Dead, Santana, Jefferson Airplane, Led Zeppelin, Cream, the Allman Brothers, and many more. Author John Glatt tells the story of the Fillmores through the lives of Bill Graham, Janis Joplin, Grace Slick, Carlos Santana, and an all-star supporting cast. Joplin opened the Fillmore East and delivered some of her greatest performances there and at its San Francisco twin. Carlos Santana grew up as a performer at the Fillmore West after being discovered by Graham on audition night. Always unpredicatable, Grace Slick’s electrifying Jefferson Airplane was the de facto resident band at both Fillmores. Chronicling the East and West Coast cultures of the late ’60s and early '70s—New York City with its speed, heroin, and the Velvet Underground versus San Francisco with the LSD-drenched Summer of Love—Glatt reveals how Graham the made it all possible . . . that is, until August 1969 when Woodstock changed everything and musicians suddenly realized their power.
But why did Bill Graham shutter both Fillmores within weeks of each other in 1971, during the height of their popularity? Live at the Fillmore East and West reveals how Graham’s claim that “The flowers wilted and the scene changed,” was not quite the whole story.

A native of London, England, John Glatt left school at sixteen and worked in a variety of jobs – including tea boy and messenger – before joining a small weekly newspaper outside London, where he honed his keen news sense. Over the next few years he freelanced for many national English newspapers, including The Daily Express, The Sunday People, The Daily Mail and Woman Magazine. In 1981 he moved to New York, working on staff for News Limited, as well as freelancing for Newsweek, Omni, the New York Post, the Australian, Modern Business and other newspapers and magazines worldwide. His first book, Rage & Roll: Bill Graham and the Selling of Rock, was published in 1993 to critical acclaim. Two years later he wrote Lost in Hollywood: The Fast Times and Short Life of River Phoenix, a well received biography of the tragic movie star. His next book, The Chieftains: An Authorized Biography, which was published in 1997, saw him nominated for a 2000 Grammy in the spoken word category. In 1998 he wrote the well-received The Ruling House of Monaco: The Story of a Tragic Dynasty, uncovering many new revelations about the Grimaldis. In 1998 he wrote his first true crime book, For I Have Sinned: True Stories of Clergy Who Kill. A year later he followed it up with Evil Twins, an anthology of twins that kill. And since then he has written a true crime book a year, establishing him as a master of the genre. Over the years, Glatt has appeared on scores of television and radio programs all over the world, including Dateline NBC, Fox News, Current Affair, BBC World, and A&E Biography. He and his jewelry designer wife Gail divide their time between New York City, the Catskill Mountains and London. Visit his web site at http://www.johnglatt.com/