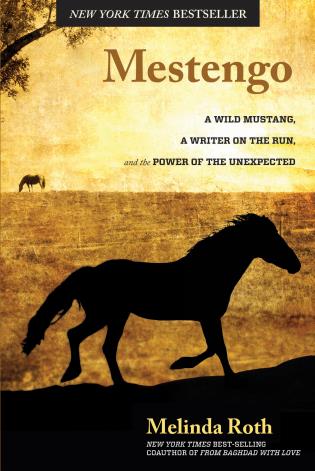 A Wild Mustang, A Writer On The Run, And The Power Of The Unexpected

Exhausted by her job as a political press secretary, Melinda Roth found the courage to escape. Her goal: a simpler life in rural Illinois that would let her pursue her passion for writing. But then real life intervened. A fire at a neighboring farm and a misinterpreted gesture of kindness transformed her into the reluctant caretaker of a homeless menagerie of animals. Roth, coauthor of the New York Times-bestseller From Baghdad with Love, writes vividly, movingly, and often humorously of the chaos that descended into her life. One of her new tenants was a wild mustang, broken but not bowed, his restless spirit propelling him to escape the fences and pens that enclosed him—a far different life than before he was violently captured by a government-sponsored “round-up.” Ultimately these two fiercely independent characters each provide the catalyst for the other’s life-changing and life-affirming decisions. Mestengo is a captivating, emotional account that taps into readers’ love of animals: Marley and Me meets The Horse Whisperer. An entertaining and delightful read, it is a cinematic, sometimes tense, but always beautiful story of the power of healing.

Melinda Roth is the author of The Man Who Talks to Dogs, a former award-winning political journalist, and a former Capitol Hill press secretary. She co-wrote the international bestseller From Baghdad with Love (Lyons, 2006) and Don’t Dump the Dog and also worked on the bestselling Wesley the Owl.