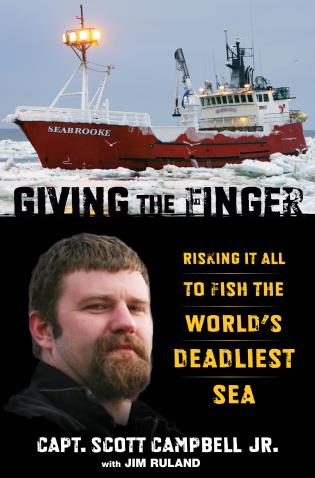 Risking It All To Fish The World's Deadliest Sea

Part documentary, part reality-television, the story of the Deadliest Catch’s Alaskan crab fishermen risking their lives in the Bering Sea to make a buck and feed their families has captivated the world. Giving the Finger follows the life of the spirited young captain who has emerged as one of the most talked-about figures on the show, Scott Campbell Jr., who leads the crew of the Seabrooke. As this book--a prequel to Junior’s ascent to fame--shows, the trials of crabbing are not limited to living at sea and working the most dangerous job on the planet, but carry over to family and friends, and are usually stormier than the Bering. Junior began his life as a fisherman in the shadow of his father, Scott Campbell Sr., and has struggled consistently to gain his own reputation as a captain. Arguably, one of the best fishermen working the waters today, Campbell Jr. has certainly done that, but not without sacrifice, of all sorts. Campbell has divorced and re-married the same woman three times, endured handicapping injuries and lost crew members to the icy waters of the north. Giving the Finger gives a first person account of these losses and the everyday fight for life and love, and shows that by hard work and perseverance, even a kid from Walla Walla, Washington, can become a star.

Captain Scott Campbell, a.k.a. Junior, was just 26 when he captained his first boat, he's been at the helm of the Seabrooke for more than ten years, turning the vessel into one of the top producers in the fleet. Living and working by his motto of "never be satisfied," Junior is always looking for innovative ways to catch crab.

Writer Jim Ruland is a veteran of the U.S. Navy where he served as a Boatswain’s Mate and traveled all over the Western Pacific. He has won numerous awards, including a fellowship from the National Endowment for the Arts, and his story "Homeward Bound" was the winner of the Reader’s Digest 2012 Life Story contest.