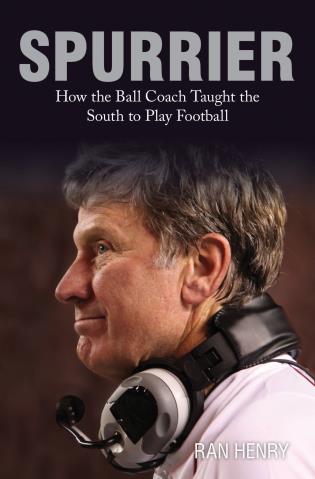 How The Ball Coach Taught the South to Play Football

“We all like to prove people wrong who say we’re no good,” says the eternally driven Steve Spurrier, the 1966 Heisman Trophy winner and NFL quarterback who took off his helmet, put on his coaching visor, and turned three downtrodden universities into winners. Spurrier’s Fun ’N’ Gun offense at the University of Florida flummoxed defenses and rewrote playbooks across the Southeastern Conference, transforming SEC football into a modern phenomena. Spurrier tells the story of a preacher’s son from the Tennessee hills who has been overwhelming opponents with “ball plays” for nearly six decades.

The climax of his storied career is uplifting the University of South Carolina, a school that lost more football games than it won between 1892 and 2005, and was believed for over a century to be cursed. The only Heisman Trophy winner ever to coach another Heisman Trophy Winner, Spurrier dared to enter the “graveyard of coaches” at South Carolina, confronted his destiny, and turned the USC Gamecocks into an unlikely winner. Spurrier is the biography of the Ball Coach who has forever changed college football—and its impact on our culture.

Ran Henry is an author, photographer, and writing professor. A Ralph McGill Scholar at Hampden-Sydney College in Virginia, he earned an MFA in creative writing from Florida International University and wrote for the Florida Times-Union, the St. Petersburg Times, and Tropic, the Miami Herald Sunday magazine. He has taught writing at FIU and Virginia Commonwealth University. He currently teaches at the University of Virginia and teaches football writing for the nation’s number-one Honors College at the University of South Carolina. He first interviewed Steve Spurrier in 1986 and began writing Spurrier when the coach led the Florida Gators to their first-ever national championship in 1997. Henry divides his time between Charlottesville, Virginia; Columbia, South Carolina; and a home in the mountains of West Virginia