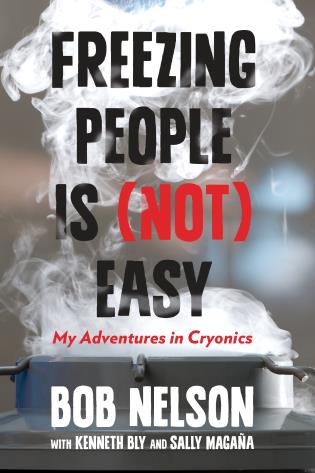 Freezing People Is (Not) Easy

My Adventures In Cryonics

Bob Nelson was no ordinary T.V. repairman. One day he discovered a book that ultimately changed his entire life trajectory --The Prospect of Immortality by Professor Robert Ettinger. From it, he learned about cryonics: a process in which the body temperature is lowered during the beginning of the dying process to keep the brain intact, so that those frozen could potentially be reanimated in the future.

A world of possibilities unfolded for Nelson, as he relentlessly pursued cryonics and became the founder and President of the Cryonics Society of California. Working in coalition with a biophysicist, in 1967 Nelson orchestrated the freezing of Dr. James Bedford, the first human to be placed in cryonic suspension. Soon thereafter he began freezing others who sought his help, obtaining special capsules and an underground vault. Underfunded, Nelson struggled desperately, often dipping into his own savings, and taking extraordinary measures to maintain his patients in a frozen state. His fascinating memoir reveals his irrepressible passion for life and chronicles the complicated circumstances that comprised his adventures in cryonics.

Bob Nelson is the author of We Froze the First Man and was the president of the Cryonics Society of California. In 1967, he froze the first man. He has made appearances on Regis Philbin, Phil Donahue, and NPR's This American Life. His story is being adapted into a major motion picture, featuring a star-studded cast. He lives in Oceanside, California.