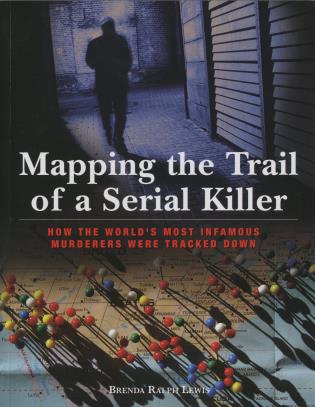 Mapping the Trail of a Serial Killer

How The World's Most Infamous Murderers Were Tracked Down

A fully illustrated, innovative look at the killing sprees of twenty-five notorious killers

The idea of the wandering murderer, leaving a trail of mutilated bodies in his wake, has long fascinated followers of true crime. By charting the geography of the killer's actions, Mapping the Trail of a Serial Killer takes an innovative geographical approach to exploring the killing sprees of twenty-five notorious murderers from the early-twentieth century right up to the present day. With specially commissioned maps pinpointing each killer's actions, and archival photographs, this book reveals patterns of behavior and provides fascinating insight into the minds behind some of the world's most shocking crimes. Most of the cases examined are from recent decades, and include the Beltway sniper attacks in Washington, D.C., as well as those of:

Ted Bundy—Murdered and sexually assaulted at least thirty-five young women across America beginning in 1973. Executed in 1989.

David Berkowitz “Son of Sam”—Confessed to killing six people and wounding seven in the course of eight shootings that held New York City in terror between 1976 and 1977.

Peter Sutcliffe—Dubbed the Yorkshire Ripper, this English killer was convicted in 1981 for murdering thirteen women.

Andrei Chikatilo—Convicted of the murders of fifty-two women and children, mostly in southern Russia, between 1978 and 1990.

Brenda Ralph Lewis has written more than 85 books, including Kings & Queens of Europe: A Dark History, Monarchy: The History of an Idea, Great Civilizations from Prehistoric Times to the Present Day, and Pirate Code.