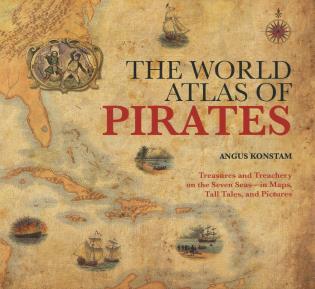 Treasures And Treachery On The Seven Seas--In Maps, Tall Tales, And Pictures

By combining stunning cartography with engaging and authoritative text, The World Atlas of Pirates presents the story of piracy in a completely new way. Eighty maps plot the routes that pirates followed—whether crossing the world's great oceans or pursuing their prey through creeks and bays. Colorful archive illustrations, including photographs and images from England's National Maritime Museum and other historic collections, bring the villains, their ships, and their victims to life. Lively, accessible text by pirate expert Angus Konstam explains how piracy grew and flourished from the early buccaneers to the rogues of popular legends, how it has been snuffed out, and how it has reared its head again with the machine-gun-toting pirates operating on today's high seas.

Angus Konstam is a prolific author, with over 50 historical titles in print. His piratical titles include The History of Pirates (Lyons Press), Pirates! and Pirates, 1680-1730 and The Pirate Ship. Other publications include History of Shipwrecks, A Historical Atlas of Exploration, and The Spanish Galleon. He studied history and archaeology at the Scottish Universities of Aberdeen and St. Andrews, and is also a former naval officer, an underwater archaeologist and a museum curator. He has advised the archaeologists who excavated Blackbeard's Queen Anne's Revenge, and has made several TV appearances as a piratical "talking head" for the History Channel. He is also the author of Blackbeard: America's Most Notorious Pirate. The author lives in Edinburgh, UK.