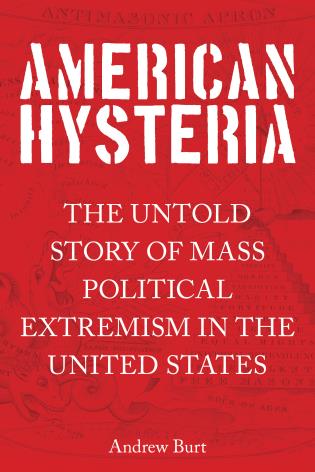 The Untold Story of Mass Political Extremism in the United States

This debut book from Andrew Burt details the pivotal moments in American political history when outliers moved to the center, capturing the national spotlight and turning fringe politics mainstream. American Hysteria puts readers at the center of the nation’s most prominent periods of political extremism, from the Anti-Illuminati movement of the 1790s to McCarthyism in the 1950s to the Anti-Sharia movement of today. Both a deep dive into American history and a riveting narrative account, this is book is as much history lesson as it is drama.

Burt argues that political hysteria arises in periods of deep uncertainty about American identity, and that when Americans lose their sense of who they are, they lash out against perceived threats with blacklists, scapegoating, conspiracies, cover-ups and more. By exploring the infamous and sometimes forgotten movements and characters of our nation’s past, this fascinating book provides a unique view into America’s history, its identity, and ultimately its future.

A former reporter for U.S. News & World Report, Andrew Burt is currently a Visiting Fellow at Yale Law School's Information Society Project. His articles have appeared in Slate, Politico, and The Atlantic, among other publications. This is his first book.