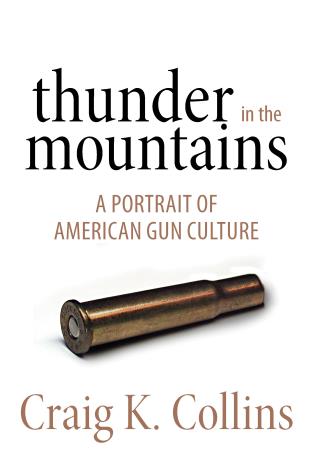 Thunder in the Mountains

A Portrait of American Gun Culture

In this beautifully written and powerful memoir, author Craig K. Collins ushers readers down a remarkable path – one that wends from the American frontier to present-day suburbia. Along the way, he explores the meaning of a history – of his family’s and his country’s – that is infused with the culture of the gun. Stops include an Indian massacre at Bad Axe, the siege of Vicksburg, the slaughter of buffalo in Montana, and the discovery of gold in a remote Nevada canyon. The story begins on a hunting trip Collins took with his father and brothers in the early ‘70s, when he was accidentally shot with a high-powered deer rifle at the age of 13 near the top of an isolated peak in Northeastern Nevada. He tells a personal story of a childhood in Idaho and Nevada, where hunting is a way of life and guns are revered – often with fatal and unintended results. He recalls friends – past and present – whose lives have been forever shattered or altered by the explosive force of a bullet.

Craig K. Collins was born in Pocatello, Idaho, in 1960, and was raised in small towns throughout the Great Basin—Carson City, Nevada; Winnemucca, Nevada; and Bishop, California. He attended college in San Diego, where he has lived since, and holds a BA in English and an MBA from San Diego State University. After a stint as a journalist, he served as a senior executive for Fortune 500 companies. Later, he founded a series of venture-backed technology start-ups. He has won a number of professional awards for writing, marketing, innovation, and entrepreneurship. He is the author of Midair (Lyons Press, 2016) and Thunder in the Mountains (Lyons Press, 2014).