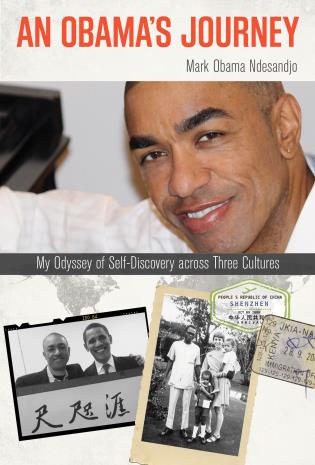 My Odyssey of Self-Discovery across Three Cultures

In this revealing and beautifully written memoir, Mark Obama Ndesandjo, recounts his complex relationship with his older half-brother, President Barack Obama, including their first meeting in Kenya over twenty years ago. The book also offers the author's inspiring personal story about identity and multiculturalism. Rare family photos add to the book's personal nature as does the intense recounting of domestic violence in the home of Barack Obama Sr.’s  and his third wife, Ruth Baker, Mark’s Jewish-American mother.
The book also attempts to set the records straight on several points of the president’s best-selling memoir Dreams from My Father. In its connection to President Obama, Mark's story takes on an even greater significance because it becomes all the more directly, a story of American identity and a window into the complex figure of the father they share, Barack Obama Sr., their roots in Kenya, their multicultural identities, and their relationships with America.

Born in Kenya and a twelve year resident of Shenzhen, People's Republic of China, Mark Okoth Obama Ndesandjo is an accomplished pianist, writer, artist and businessman. He has a BSc. Physics rom Brown University, an MSc Physics from Stanford and is an Emory EMBA graduate. He consults worldwide, using over 15 years of telecommunications and international marketing and branding experience gained as a senior manager at Lucent, Nortel and other companies. He is an HSK L7 (advanced) Mandarin speaker and writer, and an avid brush calligrapher. In addition to his first book the novel Nairobi to Shenzhen, he has published 3 piano CDs, The Untimely Ones, Night Moods and his own composition Reflections on William Blake.
His current projects include a translation of Tang Dynasty poems. He regularly gives piano lessons to orphans in and around Shenzhen. Mr. Obama Ndesandjo has been appointed Volunteer Image Ambassador and Special Olympics Image Ambassador by China. Recently he established the Mark Obama Ndesandjo Foundation Ltd for cultural exchange, which brings art to youth and the disadvantaged. He lives in Shenzhen, China. http://www.markobamandesandjo.com/