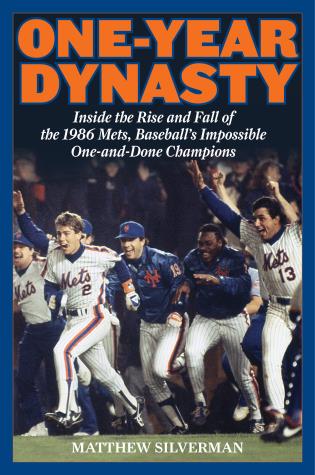 Inside the Rise and Fall of the 1986 Mets, Baseball's Impossible One-and-Done Champions

Relive the games, moves, and players of the hard-hitting team that won the 1986 World Series. Vin Scully called the tenth-inning groundball in Game Six of the 1986 World Series—Mets versus Red Sox—that sealed a comeback, fueled a curse, and turned a batting champion into a scapegoat. But getting there was a long, hard slog with plenty of heartache. After being knocked out of contention the previous two seasons, the Mets blasted through the National League that year. They won blowouts, nailbiters, fights, and a 14-inning game that ended with one pitcher on the mound, another in right field, and an All-Star catcher playing third base. Matt Silverman covers famous baseball players including: Ron Darling, Dwight Gooden, Keith Hernandez, Darryl Strawberry and more. Going beyond the partying and excess, Silverman recounts in this book, step by step, the team’s meteoric rise in 1986, when they captured their first division title in over a decade, shattered the franchise record, and then won it all.

Matt Silverman is the author of Swinging ’73: Baseball’s Wildest Season, New York Mets: The Complete Illustrated History, Mets Essential, 100 Things Mets Fans Should Know and Do Before They Die, and Best Mets: Fifty Years of Highs and Lows from New York’s Most Agonizingly Amazin’ Team. He served as associate publisher for Total Sports Publishing, working with partners Major League Baseball and Sports Illustrated. A longtime member of the Society of Baseball Research, he was lead writer, editor, and spokesman for Baseball: The Biographical Encyclopedia. Profiled in the New York Times, Silverman has been interviewed on ESPN radio, NPR, Sports Net New York, and numerous other programs and publications. He blogs regularly at MetSilverman.com and lives with his family in High Falls, New York.