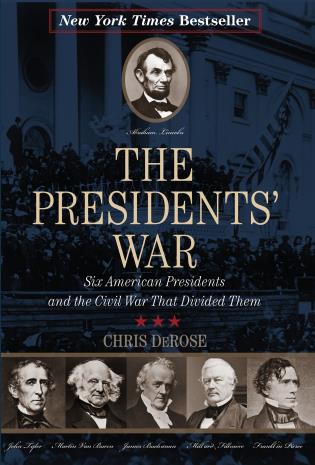 Six American Presidents and the Civil War That Divided Them

For the first time, readers will experience America’s gravest crisis through the eyes of the five former presidents who lived it. Author and historian Chris DeRose chronicles history’s most epic Presidential Royal Rumble, which culminated in a multi-front effort against Lincoln’s reelection bid, but not before:
* John Tyler engaged in shuttle diplomacy between President Buchanan and the new Confederate Government. He chaired the Peace Convention of 1861, the last great hope for a political resolution to the crisis. When it failed, Tyler joined the Virginia Secession Convention, voted to leave the Union, and won election to the Confederate Congress.
* Van Buren, who had schemed to deny Lincoln the presidency, supported him in his efforts after Fort Sumter, and thwarted Franklin Pierce's attempt at a meeting of the ex-Presidents to undermine Lincoln.
* Millard Fillmore hosted Lincoln and Mary Todd on their way to Washington, initially supported the war effort, offered critical advice to keep Britain at bay, but turned on Lincoln over emancipation.
* Franklin Pierce, talked about as a Democratic candidate in 1860 and ’64, was openly hostile to Lincoln and supportive of the South, an outspoken critic of Lincoln especially on civil liberties. After Vicksburg, when Jefferson Davis’s home was raided, a secret correspondence between Pierce and the Confederate President was revealed.
* James Buchanan, who had left office as seven states had broken away from the Union, engaged in a frantic attempt to vindicate his administration, in part by tying himself to Lincoln and supporting the war, arguing that his successor had simply followed his policies.
How Abraham Lincoln battled against his predecessors to preserve the Union and later to put an end to slavery is a thrilling tale of war waged at the top level of power.

Chris DeRose is the author of the highly acclaimed Congressman Lincoln: The Making of America’s Greatest President and Founding Rivals: Madison vs. Monroe, the Bill of Rights, and the Election that Saved a Nation. DeRose is an assistant professor of law at Arizona Summit Law School and political strategist who for the past seventeen years has served in nearly every capacity on campaigns up and down the ballot in five different states. He lives in Phoenix, Arizona.
Visit him at chrisderosebooks.com or @chrisderose on Twitter.