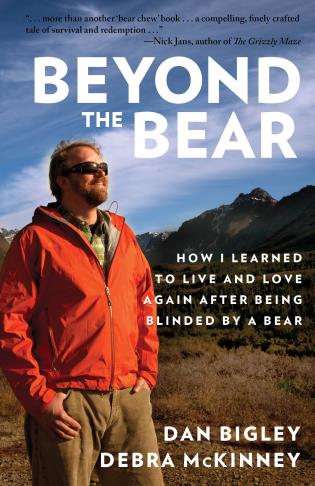 A 25-year-old backcountry wanderer, a man happiest exploring wild places with his dog, Dan Bigley woke up one midsummer morning to a day full of promise. Before it was over, after a stellar day of salmon fishing along Alaska’s Kenai and Russian rivers, a grizzly came tearing around a corner in the trail. Dan barely had time for “bear charging” to register before it had him on the ground, altering his life forever.

Until then, one thing after another had fallen into place in Dan’s life. He had a job he loved taking troubled kids on outdoor excursions. He had just bought a cabin high in the Chugach Mountains with a view that went on forever. He was newly in love. After a year of being intrigued by a woman named Amber, they had just spent their first night together. All of this was shattered by the mauling that nearly killed him, that left him blind and disfigured.

Facing paralyzing pain and inconceivable loss, Dan was in no shape to be in a relationship. He and Amber let each other go. Five surgeries later, partway into his long healing journey, they found their way back to each other. The couple’s unforgettable story is one of courage, tenacious will, and the power of love to lead the way out of darkness. Dan Bigley’s triumph over tragedy is a testament to the ability of the human spirit to overcome physical and emotional devastation, to choose not just to live, but to live fully. Visit Dan Bigley's site or Beyond the Bear.

Dan Bigley, who earned a master's degree in social work after losing his sight, is now the director of therapeutic foster care services at Denali Family Services in Anchorage and was awarded a 2008 Alaskan of the Year Award by the Governor’s Committee on Employment and Rehabilitation for People with Disabilities. He lives in Anchorage, Alaska.

Debra McKinney is a freelance writer who was part of a team that won journalism’s highest honor, the Pulitzer Prize for Public Service, for the Anchorage Daily News. She lives in Anchorage, Alaska.