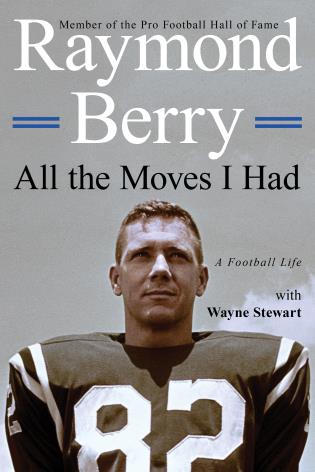 All the Moves I Had

Pro Football Hall of Famer Raymond Berry is a true giant of the game. He lacked blazing speed or imposing size, yet he revolutionized the wide receiver position; starred in football’s “Greatest Game Ever Played,” the 1958 NFL Championship; and was part of football’s most legendary pass-catch combination with his quarterback and friend Johnny Unitas. Football wouldn’t be what it is today without “Unitas to Berry.”

In All the Moves I Had, Berry brings readers inside a football career that spanned four decades and featured a Who’s Who of the NFL. As a receiver for the Baltimore Colts of the 1950s and 1960s, he nearly scientifically developed an inventory of moves and fakes to get open, and intensely studied defensive backs and their coverage techniques—pioneering these integral parts of today’s passing-game preparation. In this book he breaks down, play-by-play, his historic performance in the contest that secured pro football’s popularity—the 1958 final that was the NFL’s first to end in overtime and first to be nationally televised. He recounts coaching for the Dallas Cowboys and head coaching the New England Patriots, a team he took to the Super Bowl. One of today’s senior members of Pro Football Hall of Fame, Raymond Berry is a national treasure of football history, strategy, technique, and—just as important—friendship, family, love, and faith.

“He was his own man. He was poised, as though he had pondered everything a little harder than anyone else. . . . He was deconstructing and reinventing the position of wide receiver.” —Mark Bowden in The Best Game Ever

RAYMOND BERRY was inducted into the Pro Football Hall of Fame in 1973. He lives with his wife in Tennessee, where they often see their children and grandchildren.

WAYNE STEWART is an author and sportswriter with articles in such publications as USA Today, Baseball Digest, and Boy's Life.