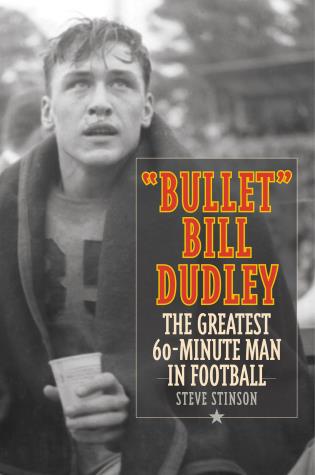 The Greatest 60-Minute Man in Football

You can’t separate football from the man. The game gave him everything and “Bullet Bill” Dudley said as much. But you can separate the man from football. As a husband, father, businessman and citizen, he put far more into this world than he took out. Three years before Bill died, he asked his son-in-law Steve Stinson to write his story.

William McGarvey "Bullet Bill" Dudley (December 24, 1921 – February 4, 2010) led a thrilling career as a professional American football player in the National Football League for the Pittsburgh Steelers, Detroit Lions, and Washington Redskins. With humble beginnings in Bluefield, Virginia he made the football team his junior year, and in 1938 he kicked a 35-yard field goal in the season's finale. Dudley was drafted in the 1942 NFL Draft with the first overall pick by the Pittsburgh Steelers. He was inducted into the Pro Football Hall of Fame in 1966 and the Virginia Sports Hall of Fame in 1972. During the 1942 season, he led the league in rushing with 696 yards on 162 carries and was then named to the All-Pro team. Steve Stinson revisits his father-in-law’s journey from Bluefield, Virginia through his retirement from the NFL and shares everything he brought to communities in between each pivotal moment in Dudley’s life.

Steve Stinson is son-in-law to “Bullet Bill” Dudley. Steve is an artist and writer in Virginia, where he lives with his patient wife in the world’s smallest five bedroom house. When he was young and limber, he was a juggler and wrote comic strips. Today, his grandchildren call him “Bebop.” His previous children’s books include, Grumpypants, Where Kent Went, Darien the Crustatarien, and My Favorite Nursery Rhymes.