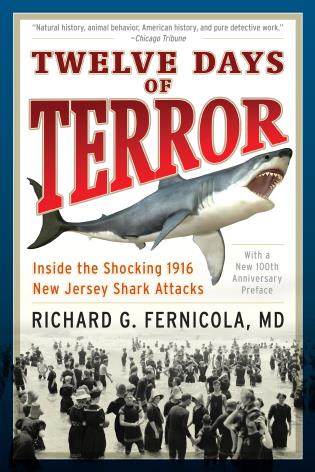 Upon the 100th anniversary of the most terrifying stretch of shark attacks in American history--a wave said to have been the inspiration for Jaws--comes a reissue of the classic Lyons Press account and investigation. In July 1916, a time when World War I loomed over America and New York City was in the midst of a deadly polio epidemic, the tri-state area sought relief at the Jersey shore. The Atlantic’s refreshing waters proved to be utterly inhospitable, however. In just twelve days, four swimmers were violently and fatally mauled in separate shark attacks, and a fifth swimmer escaped an attack within inches of his life. In this thoroughly researched account, Dr. Richard Fernicola, the leading expert on the attacks, presents a riveting portrait, investigation, and scientific analysis of the terrifying days against the colorful backdrop of America in 1916 in Twelve Days of Terror.

Richard G. Fernicola is recognized as the foremost authority on the New Jersey shark attacks of 1916. His research became the basis for the highly acclaimed television documentaries Legends of Killer Sharks and Shark Attack: 1916, which aired on the Discovery Channel and The History Channel. He is also actively involved in the preservation and rescue of marine mammals.