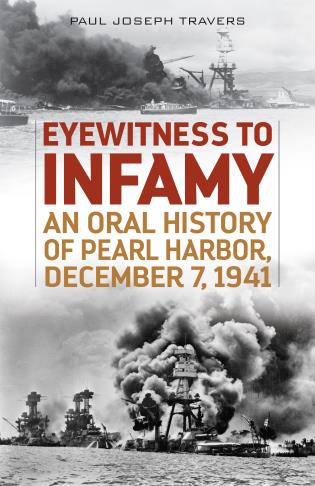 The Japanese attack on Pearl Harbor changed the lives of almost every American, and began the process of putting 17 million of them in uniform to fight in World War II. Yet in the long and fascinating body of literature about this terrible event, most historians have neglected the compelling and moving accounts of the surviving military personnel and civilians who were on Oahu at the time of the attack, at dawn on December 7, 1941.

Eyewitness to Infamy is their story—the astonishing oral history of the brutal attack that pushed the United States into WWII on the side of the Allies: the British, French, and Russians. With the help of the Pearl Harbor Survivors’ Association, the Veterans of Foreign Wars, and the American Legion, Paul Travers collected more than 200 eyewitness accounts from which he painstakingly selected those critical to this behind-the-scenes narrative account. With breathtaking clarity, the narratives cover the full range of military activity on the island, along battleship row, and around the harbor, while portraying the human side of the event—the heroic, the tragic, and the terrible reality of the assault.

Paul J. Travers received a B.A. from the University of Maryland and an M.A. from Pepperdine University. He served in the U.S. Marine Corps as an amphibious armor officer. A former historian for the Maryland Park Service, he is the author of The Patapsco River: Baltimore’s River of History.