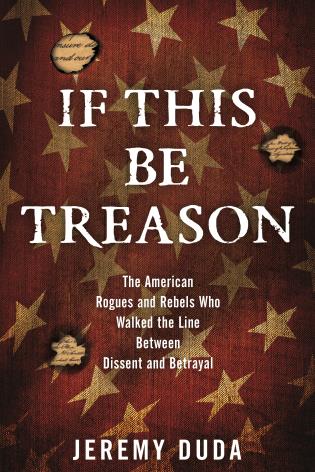 If This Be Treason

Treason is the only crime explicitly defined in America’s Constitution. Relatively few Americans have been convicted of it. Far more have had the poisonous word thrown at them.

Through the cases of Americans who—whether acting in defense of their country, for personal gain, or simply when society had redefined treasonous activity—were accused of betraying their country, though not charged with the ultimate crime against one’s nation, If This Be Treason tackles the complicated question of where dissent ends and betrayal begins. Jeremy Duda covers the gamut of American history, from the earliest days of the republic, when George Logan’s act of unauthorized diplomacy kept his fledgling country out of war with France but so outraged his enemies that Congress passed a law to prevent it from ever happening again, to today as Edward Snowden remains an international fugitive for exposing the government’s spying on its own citizens. Among other examples are diplomatic envoy Nicholas Trist, who betrayed his president’s order to return home so he could negotiate a just treaty with a vanquished foe; former congressman Clement Vallandigham, who was exiled from his own country for speaking out against Lincoln’s prosecution of the Civil War; and Richard Nixon, who scuttled a peace deal to end the war in Vietnam.

“If this be treason, make the most of it!” So proudly declared Patrick Henry, accused of treason for opposing the Stamp Act imposed by Great Britain on its American colonies. Throughout history, Americans have toed the line between treason and dissent. Exactly where that line is has remained difficult to ascertain. But these cases serve as a fascinating way to explore and interpret where dissent ends and betrayal begins..

This is the debut book for Jeremy Duda, a twelve-year veteran of print journalism and an award-winning reporter in the world of Arizona politics and government. At the Arizona Capitol Times, which is widely regarded as the premier source of political news in Arizona, has spent more than six years covering the Governor's Office beat and other political stories. Has a proven record of breaking high-profile news and scooping much larger competitors, developing sources deep inside the often murky world of politics and government, and providing some of the most comprehensive and insightful reporting on politics and government in the state of Arizona. He lives Phoenix, Arizona.