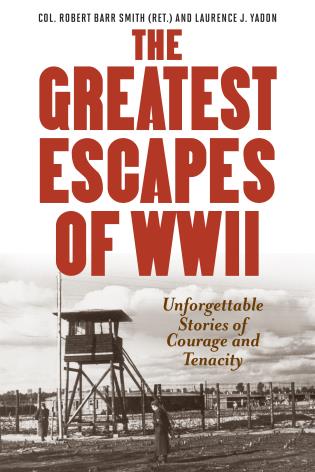 Throughout WWII, thousands of Allied prisoners dreamed of outwitting their captors and returning to war against the Axis. Their ingenuity knew no bounds: they went over the barbed wire surrounding them and under it as well; they built tunnels of enormous length and complexity, often working with only their bare hands. They concealed themselves in their captors’ vehicles and hitched rides to freedom. They became world-class forgers and tailors; they stole anything that might be useful to their escapes that wasn’t actually red-hot or nailed down.

Some of them made it to freedom; some did not. Many of those who failed simply tried again and again until they succeeded. Some of the escapers who were caught were murdered by the Japanese or the German Gestapo. That did not stop others from risking torture or death to gain their freedom. Many men whose break was initially successful would not have survived save for the dangerous, selfless help of civilians, especially in occupied Europe and the Philippine Islands.

The stories in The Greatest Escapes of WWII highlight the courage, endurance, and ingenuity of Allied prisoners, chronicling their ceaseless efforts and the alarm that spread far and wide when one or more escaped. These escapes tied up thousands of Axis soldiers who might otherwise have prolonged the war for many more bloody months. The troops committed to guard the Allied prisoners and recapture escapers numbered in the hundreds of thousands.

Col. Robert Barr Smith (Ret) has a BA in History and Doctor of Laws from Stanford University. He entered the United States Army as a private and retired as a colonel, serving in Vietnam, twice in Germany and with troop units and on posts throughout the United States. He was a senior Parachutist with 65 jumps, and his decorations include the Legion of Merit (two awards) and the Bronze Star. After retiring from the service, Col. Smith became a law professor at the University of Oklahoma. He now lives in Blue Eye, Missouri, where he is a full-time writer.
He is the author or co-author of sixteen books and well over a hundred magazine articles in such periodicals as Military History, Wild West, British Heritage, Vietnam, World War II History, and Civil War Times.
Laurence J. Yadon is an attorney, mediator and arbitrator and speaker on legal subjects and the American West. He is general counsel of a federal power administration which markets federally generated hydropower in a six-state area. Mr. Yadon provides legal and legislative advice on employment, labor, construction, general contract, real estate, telecommunications and utility matters.
Mr. Yadon is the current editor of the Tulsa Lawyer magazine as well as past co-chair and current newsletter editor of the Alternative Dispute Resolution Section of the Oklahoma Bar Association. He also serves on the University of Tulsa, College of Law Sustainable Energy & Resources Law Board of Visitors.
A graduate of the University of Tulsa and University of Oklahoma College of Law, Mr. Yadon has served as a Fact Finder for the Department of Justice. He has been an Adjunct Settlement Judge for the United States District Court for the Northern District of Oklahoma since 1994.