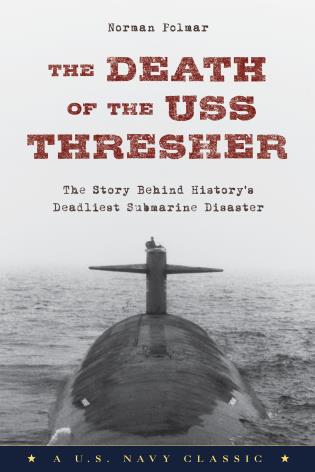 The Death of the USS Thresher

A must-read for submarine buffs!

On the morning of April 10, 1963, the world's most advanced submarine was on a test dive off the New England coast when she sent a message to a support ship a thousand feet above her on the surface: experiencing minor problem . . . have positive angle . . . attempting to blow . . . . Then came the sounds of air under pressure and a garbled message: . . . test depth . . .

Last came the eerie sounds that experienced navy men knew from World War II: the sounds of a submarine breaking up and compartments collapsing.

When she first went to sea in April of 1961, the U.S. nuclear submarine Thresher was the most advanced submarine at sea, built specifically to hunt and kill Soviet submarines. In The Death of the USS Thresher, renowned naval and intelligence consultant Norman Polmar recounts the dramatic circumstances surrounding her implosion, which killed all 129 men on board, in history's first loss of a nuclear submarine.

Norman Polmar has been a consultant to senior officials of the U.S. Navy and Department of Defense, and has directed studies for U.S. and foreign aerospace and shipbuilding firms. He was a member of the Secretary of the Navy's Research Advisory Committee (NRAC) and the steering group for the Secretary's analysis of the Falklands War. For four years-as an employee of the Northrop Corporation-he worked for the Navy's Deep Submergence Systems Project (DSSP), which developed advanced escape and rescue systems in the wake of the Thresher disaster. He is the author of more than thirty books on naval, aviation, and intelligence projects. He lives in Alexandria, Virginia.