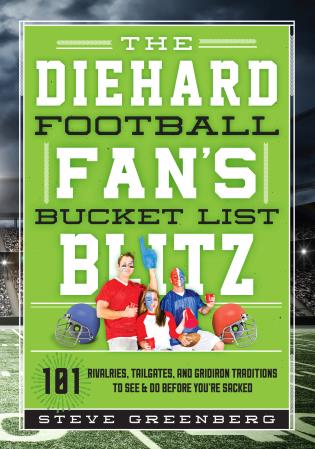 101 Rivalries, Tailgates, and Gridiron Traditions to See &amp; Do Before You’re Sacked

Steve Greenberg has written for the Chicago Sun-Times, The New York Times, Sporting News, Basketball News and Inside Sports. He has covered dozens of postseasons in college football, college basketball, the NFL, the NBA, the NHL, and major league baseball. Since the summer of 2013 he has been the national college football and college basketball writer for the Sun-Times, bringing a strong columnist's voice and rare-in-Chicago command of the major-college landscape to a market that — whether it knows it or not — needs one.
From 2011-13, he was a national college football writer for The Sporting News who dabbled in NBA and college basketball coverage. From 2008-11, as former editor-in-chief Jeff D’Alessio put it, Steve was “the general-assignment go-to guy for the world’s oldest sports magazine.” Prior to that, Steve was an editor. TSN hired him in 2000 as a managing editor in charge of college football coverage across all platforms. Within two months, he was handed the college basketball reins as well. A few years later, he was tasked with devising and implementing a front-of-the-book section for The Sporting News magazine; directorship of special issues soon followed.
Greenberg has also worked for Inside Sports, Hockey Digest, Football Digest, and Basketball News. He was an on-air member of Inside Sports’ national radio show. He lives in St. Louis with his wife and three children.