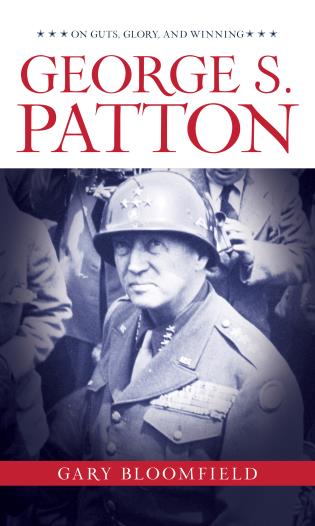 On Guts, Glory, and Winning

George S. Patton: On Guts, Glory, and Winning relies on the writings, speeches, and poems of George Patton, and includes his prayer to stop the rain during the battle of northern Europe. What separates this book from all of the many about World War II’s most famous battle commander is the extensive use of exquisite B&W combat photos on every spread, which illuminate the text on those pages.

U.S. Army General George S. Patton is one of the greatest and most controversial battle commanders of World War II. His tactics were criticized by his detractors, lauded by his peers, and feared by the Nazis in North Africa, Sicily, France, and northern Europe. Some erroneously assumed he plunged his troops into battle with little or no forethought, but in fact he studied his opponent’s writings and tactics, knew the terrain and weather conditions on anticipated fields of fire, and even relied on the Bible for guidance.

Almost no other general or world leader from World War II has been written about more than Old Blood and Guts Patton – a nickname he hated. Even today, despite advances in weaponry and technology, military commanders still study his battle tactics.

Gary Bloomfield was Army Journalist of the Year in 1976, Managing Editor for VFW magazine, and Senior Editor for Faces of Victory Europe and Faces of Victory Pacific. He is the author of Maxims of General Patton; I Will Be an American Someday Soon; and Duty, Honor, Victory: America's Athletes in WWII; and co-author of Duty, Honor, Applause: America's Entertainers in WWII. He lives in south Kansas City, Missouri.