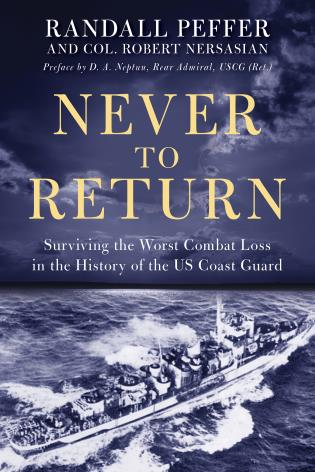 Never to Return is the harrowing tale of the torpedoing and sinking of a Coast Guard ship and the loss of 171 Coast Guardsmen off the coast of Iceland during WWII.

The USS Leopold was a U.S. Coast Guard destroyer escort in a convoy of merchant ships carrying war materiel to England, on the lookout for the deadly U-boat wolf packs lurking in the North Atlantic. The Leopold was largely unarmored, lightly armed, and no match for the U-255’s torpedoes. Never to Return is the story of gunner Sparky Nersasian and his shipmates’ struggles to survive the Leopold’s sinking.

Randall Peffer is the author of nine nonfiction books, most with a nautical angle, as well as nine crime/suspense novels. His first book, Watermen (Johns Hopkins) is a documentary of the lives of the Chesapeake’s fishermen. It won the Baltimore Sun’s Critic’s Choice award and was Maryland Book of the Year. His most recent book, Where Divers Dare: The Search for the Last U-boat (Berkley/Caliber), was published in April, 2016.

The son of a career naval officer, Peffer holds a 100-ton masters license and has logged over 100,000 miles at sea, mostly in traditional working vessels. He has been the captain of the 55’ wooden research schooner Sarah Abbot for twenty-nine years.

After 37 years teaching writing and literature at Phillips Academy, Andover, he has retired to focus full-time on his writing. He sails out of his home ports of Marion, Massachusetts, and Great Guana Cay, Abaco.

Col. Robert Nersasian is a practicing Oral and Maxillofacial surgeon. He is a retired Associate Professor of Oral and Maxillofacial Surgery at Tufts University. Nersasian is also a retired U S Army Colonel, having served on active duty during the Vietnam and Desert Storm conflicts. He has published multiple papers in medical journals. Most notably, he is the baby brother of seaman Sparky Nersasian, being one year old at the time of the sinking of the Leopold. He joined his daughter Tory in her quest to achieve recognition of the Leopold’s story with the awarding of the Purple Heart to the crew in Washington, D C, presented by U S Coast Guard Commandant, Admiral Robert J. Papp, Jr. on May 23, 2013.