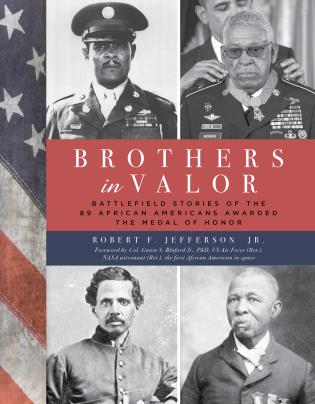 During the Battle of Fort Wagner in 1863, Sgt. William Harvey Carney picked up the fallen flag from his lifeless comrade. He waved the flag for all of the 54th Massachusetts Volunteer Infantry to see and led the way to the parapet to plant the colors. After Col. Robert Gould Shaw was mortally wounded, Carney inspired his infantry forward. Even after sustaining severe wounds, Carney proudly declared, “Boys, the old flag never touched the ground!” After this battle, Carney became the first African American to receive the Medal of Honor.


Since the American Civil War, scores of African Americans have served with great distinction. Through thousands of historical accounts, photographs, and documentary evidence, Robert Jefferson introduces the 89 black soldiers who continued forward when all odds were against them. The heroes within these pages faced certain death and definite danger without flinching.


Jefferson paints a vivid portrait of African-American soldiers who carried the flag of freedom and how they reshaped the very definition of courage under fire during some of the most harrowing moments in United States military history. In turn, their courage and determination left an indelible mark on the American portrait.