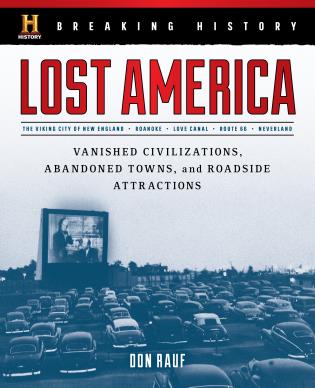 Breaking History books offer a front row seat to history as it broke (like “breaking news”) and give the blow-by-blow of historical discovery—what we learned, when we learned it, who made the discovery, and how. Lost America is an illustrated look at fascinating places in the United States that have existed only in myth and have never been found, those that were abandoned and why, and those that were lost to social upheaval or natural disaster. The book reviews the history behind these places—how they began, how long they endured, why they were lost, and how many have been rediscovered. Included are accounts of the mysterious disappearance of the Anasazi from the Southwest, the abandonment of the Roanoke Colony in 1590, the environmental disaster that caused the population of Centralia, Pennsylvania to evacuate the town in the 1980s, and the nearly-intact ghost town of Bodie, California. The book also includes places that were thought to exist, but did not--or not yet, anyway: legendary Norse settlements, lost cities of gold, and The Fountain of Youth.

Don Rauf is the author of more than forty books, the most recent of which are Schwinn: The Best Present Ever and American Inventions: Big Ideas That Changed Modern Life. With a background in journalism, he’s interviewed such celebrities as Johnny Depp, astrophysicist Neal deGrasse Tyson, songwriter Tom Lehrer, fashion designer Liz Lange, and celebrity chef Marcus Samuelsson. He lives in Seattle, Washington.