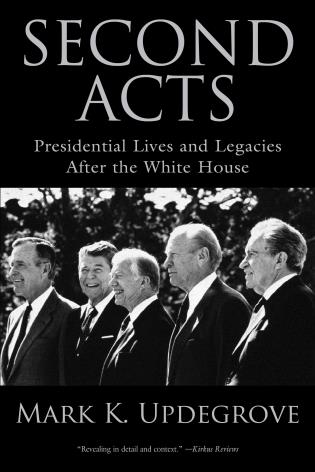 Presidential Lives And Legacies After The White House

F. Scott Fitzgerald once wrote, "There are no second acts in American lives", but more and more, our former presidents are proving him wrong. No longer fading into the background upon leaving the highest office in the land, ex-presidents perform valuable services as elder statesmen and international emissaries - and by pursuing their own agendas. From Eisenhower taking Kennedy to the woodshed (literally) on the Bay of Pigs crisis, to Carter earning the Nobel Peace Prize, to Bush Sr. and Clinton joining forces in an unlikely partnership for tsunami and Hurricane Katrina relief, the author examines the increasingly important roles that former presidents assume in our nation and throughout the world.

Through interviews with former presidents, first ladies, family members, friends, and staffers, the author also delves into the very human stories that play out as the modern ex-presidents - from Truman to Clinton - adjust to life after the White House and attempt to shape their historical legacies. In this, the first narrative history of the modern post-presidency, Mark K. Updegrove makes a refreshingly unique contribution to literature on the American presidents.

Author Mark K. Updegrove was born outside of Philadelphia in 1961. He attended high school in Newtown, PA and received a BA in Economics from the University of Maryland.
Updegrove started his career as a marketing associate for the Book of the Month Club in New York. From there he began working for Time, Inc where he worked for twelve years, the last ten of which were spent at TIME magazine.
During his tenure at Time, Inc., Updegrove served as the Los Angeles manager of TIME magazine, and president of TIME Canada.
While at TIME, Updegrove conceived “TIME and the Presidency,” a traveling exhibit consisting of photographs of all the U.S. presidents from FDR to Clinton, as well as reflections on each of the men by TIME's legendary senior editor, Hugh Sidey. The exhibit was featured at a number of the presidential libraries and included opening night events with Gerald Ford, George H.W. Bush, Henry Kissinger, and James Baker.
Updegrove also has had the pleasure of hosting dinners for Mikhail and Riasa Gorbachev, on the occasion of Gorbachev's 68th birthday; Gerald Ford, celebrating the 23rd anniversary of his inauguration as president; and Ronald Reagan, celebrating the 19th anniversary of his election as president.
In 2001 Updegrove accepted the position of publisher at Newsweek in New York, where he remained until 2002. He currently is an executive at Yahoo! based in Toronto.
Updegrove married his wife, Evelyn, in 1993 and they have two children, Charlie and Sallie. They currently live in Rye, NY and plan to move to Toronto this summer.