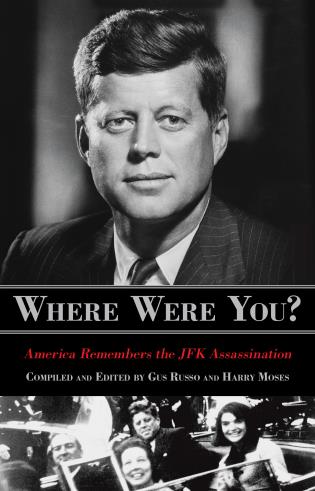 November 22, 1963. A policeman’s wife was fetching their sick child from school. A young shoe store manager had no idea what lay in wait for him that day. A future president was tending to his farm. A future vice president was standing on the steps of his college library. A Georgetown student was looking forward to playing the piano for the president when he returned to Washington, DC, that evening. A future movie star was attending his second-grade art class.
Then the news rang out across airwaves, through telephone lines, and by word of mouth, plunging the country into shock and sorrow. It’s hard to imagine how the last fifty years would have unfolded if President John F. Kennedy had lived. Would Vietnam have dragged on until 1974? Would Nixon have come into power? It’s difficult to say—but, combining evocative archival images with the unique, first-person stories of those who lived through it, Where Were You? says what the history books can’t and offers a fresh look at what was, what is, and what might have been since that fateful day.
In the two-hour NBC documentary event that this volume accompanies, special correspondent Tom Brokaw interviewed people close to the tragedy as well as former heads of state, politicians, authors, journalists, performers, musicians, and more. He asked them five simple questions, starting with: Where were you? Together, their words paint a rich and moving picture of a hopeful nation torn asunder by grief. It will remind those who lived it of a pivotal moment in American history, and it bears witness for all who follow.

Gus Russo is the author of six books, including Brothers in Arms: The Kennedys, the Castros, and the Politics of Murder, winner of the New York Book Festival’s History Prize. An investigative reporter for ABC News Special Reports (“Dangerous World: The Kennedy Years”) and CBS Reports, he served as lead reporter for Frontline’s landmark “Who Was Lee Harvey Oswald?” He has written for American Heritage, Baltimore Sun, Book Forum, Huffington Post, The Nation, and Washington Post. He lives in Baltimore, Maryland.

Harry Moses has written, directed, and produced numerous primetime specials for all major networks and cable channels, including nearly 100 stories for 60 Minutes. He has received Emmy, Peabody, and Directors Guild of America awards as well as a lifetime achievement award from the National Academy of Television Arts and Sciences. He lives in New York City.