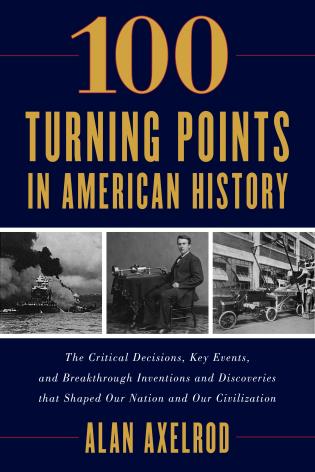 Arnold J. Toynbee, the most famous professional historian of the twentieth century, is widely quoted as having declared that “History is just one damn thing after another.” This book argues that history is not about “things” at all but is all about turning points—the decisions, acts, innovations, errors, ideas, successes, and failures on which the shape of a nation’s life—our lives—depends. It presents the 100 points at which America’s path decisively turned on its way to where we find ourselves today.

● Columbus arrives in the New World

● The first slaves arrive in America

● The Indian Removal Act is passed

● A transcontinental railroad is completed

● The B-29 Enola Gay drops an atomic bomb on Hiroshima

● The Supreme Court decides Brown v. Board of Education

These and many more are the crucial “plot points” in our grand national story, and best-selling historian Alan Axelrod presents them here.

Alan Axelrod is the author of more than 100 books on history, military history, leadership, management, corporate history, career, general business, and other nonfiction. After receiving his Ph.D. in English (specializing in early American literature and culture) from the University of Iowa in 1979, Axelrod taught early American literature and culture at Lake Forest College (Lake Forest, Illinois) and at Furman University (Greenville, South Carolina).

He has been a creative consultant (and on-camera personality) for The Wild West television documentary series (Warner Bros.), Civil War Journal (A&E Network), and The Discovery Channel, and he has appeared on MSNBC, CNN, CNNfn, CNBC, Fox Network affiliates in Philadelphia and Atlanta, and numerous radio news and talk programs, including National Public Radio. He and his work have been featured in BusinessWeek, Fortune, Men’s Health, Cosmopolitan, Inc., Atlanta Business Chronicle, and many newspapers, including Atlanta Journal-Constitution and USA Today. Axelrod has served as consultant for the Margaret Woodbury Strong Museum (Rochester, New York), the Airman Memorial Museum (Suitland, Maryland), and the Henry Francis du Pont Winterthur Museum (Winterthur, Delaware).