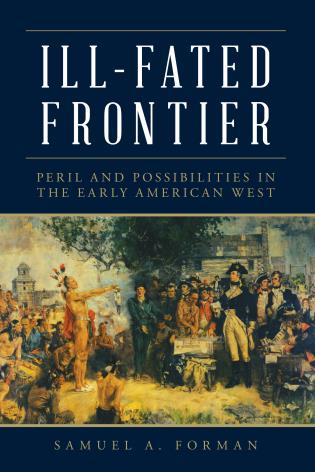 Peril and Possibility in the Early American West

Ill-Fated Frontier is at once a pioneer adventure and a compelling narrative of the frictions that emerged among entrepreneurial pioneers and their sixty slaves, Indians fighting to preserve their land, and Spanish colonials with their own agenda. Here is a lively and visceral portrait of the wild and enduring American frontier in 1789.

The melting pot America would become was barely simmering when an ill-fated attempt to settle land near Natchez in brought together a volatile mix of ambitious Northern pioneers and their slaves, Spanish colonists, and Native Americans who had claimed the land as theirs for hundreds of years. This illuminating episode in American history comes to life in this account of an expedition gone wrong. It began with an optimistic plan to settle and expand in the new territory. It ended ignominiously, with the body of one of the expedition’s leaders returning to New Jersey stored in a pickle barrel.

What happened in between—a cautionary tale of greed, incompetence, and hubris—lies at the center of this fascinating account by Harvard historian Samuel A. Forman. Endorsed by New York Times best-selling author Nathaniel Philbrick, it is a startling and frank portrait of a young America that examines the dream of an inclusive American experience and its reality—a debate that continues today.

Imperious General David Forman, a terror to his Monmouth County, New Jersey, Loyalist neighbors, during the Revolutionary War obtained a large land grant in Natchez, then part of Spanish West Florida. His charge was to establish a plantation that would lure settlers and establish a new American presence. Staying behind in New Jersey David Forman appointed his rotund and gouty older brother Ezekiel as leader of the expedition, his young cousin Samuel S. Forman as its business manager, and a former military aide as overseer of the enslaved African Americans who accompanied them.

It did not go well.

When the expedition finally reached the new territory it found waiting Spanish colonials who felt the land was theirs and Native Americans who still maintained their sovereignty over the contested lands.

When Ezekiel Forman died unexpectedly, David Forman stormed from New Jersey into Natchez to take control of the unraveling situation. He would find on his arrival that those awaiting him had other ideas about who the land actually belonged to. He would return to New Jersey quite dead and pickled in a barrel of rum.

Lively, impeccably researched, and rich in details that have escaped the usual tales of American growth and enterprise, Ill-Fated Frontier shines new and entertaining light on what it means to be an American.

Samuel A. Forman is an historian and Harvard University faculty member. He is educated at the University of Pennsylvania in American History. Throughout his successful careers as physician, military officer and businessman, he has published and lectured on historical topics that inform current issues. His definitive American Founder’s biography Dr. Joseph Warren – The Boston Tea Party, Bunker Hill, and the Birth of American Liberty [Pelican, 2012] won the American Revolution Round Table of Philadelphia’s Book of the Year. He was inducted as an honorary life member into the Society of the Cincinnati on the basis of his historical writings.