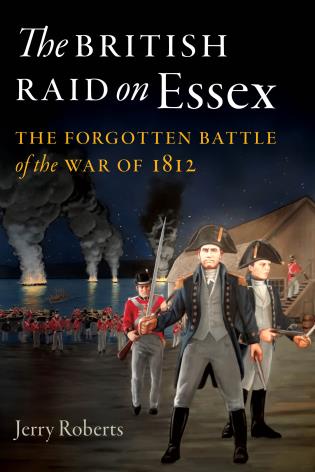 The British Raid on Essex

The Forgotten Battle of the War of 1812

This is the dynamic account of one of the most destructive maritime actions to take place in Connecticut history: the 1814 British attack on the privateers of Pettipaug, known today as the British Raid on Essex. During the height of the War of 1812, 136 Royal marines and sailors made their way up the Connecticut River from warships anchored in Long Island Sound. Guided by a well-paid American traitor the British navigated the Saybrook shoals and advanced up the river under cover of darkness. By the time it was over, the British had burned twenty-seven American vessels, including six newly built privateers. It was the largest single maritime loss of the war. Yet this story has been virtually left out of the history books—the forgotten battle of the forgotten war. This new account from author and historian Jerry Roberts is the definitive overview of this event and includes a wealth of new information drawn from recent research and archaeological finds. Lavish illustrations and detailed maps bring the battle to life.

Jerry Roberts has had a lifelong passion for history and the sea and has been a writer, maritime historian and museum executive for more than 30 years. In addition to publishing several books he has served as vice president for the Intrepid Sea Air & Space Museum in New York City, and as executive director for the National Lighthouse Museum, The Connecticut River Museum and the New England Air Museum. Roberts was the driving force behind the effort to bring national recognition to the British Raid on Essex. He lives with his wife and two children in their home overlooking the Connecticut River, where he continues to write of adventures large and small.