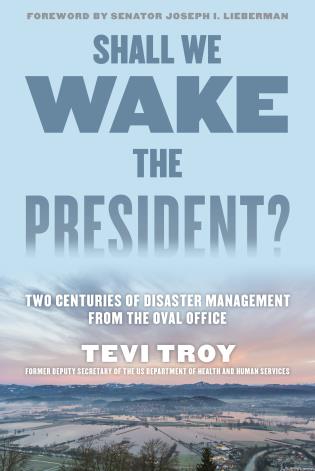 Shall We Wake the President?

Two Centuries of Disaster Management from the Oval Office

The history of presidential dealings with disasters shows that whatever their ideology, presidents need to be prepared to deal with unexpected crises. In recent years, the expectations have grown as the disasters seem to appear to be coming more frequently. Since 2001, numerous unpredictable crises, including terror attacks, massive storms, and an economic collapse, have shaken Americans to their core. It seems as if technology, for all of its beneficences, also provides mankind with increasingly powerful ways to wreak destruction, including nuclear explosions, bioterror attacks, and cyber-attacks. In addition, instantaneous and incessant communications technologies send us word of disasters taking place anywhere in the nation far more rapidly, giving disasters an immediacy that some may have lacked in the past.

In 21st century America, the eyes of the American people look to the president to lead the response to whatever disasters happen to strike. President Obama and his team learned this and were taken aback by the sheer number of crises that a president needed to deal with, including swine flu, BP’s Macondo oil spill, and the Somali pirates who attacked an American ship. Many of these did not quite reach disaster status, but Obama’s reaction to the constant stream of crises was both revealing and unnerving: “Who thought we were going to have to deal with pirates?”

In Shall We Wake the President?, Tevi Troy, a presidential historian and former senior White House aide and deputy secretary of the Department of Health & Human Services, looks at the evolving role of the president in dealing with disasters, and looks at how our presidents have handled disasters throughout our history. He also looks at the likelihood of similar disasters befalling modern America, and details how smart policies today can help us avoid future crises, or can best react to them should they occur. In addition, he provides information on what individuals can do to prepare for disasters.

This book includes sections on how American presidents have dealt with a variety of disasters, including health crises, terror attacks, economic upheaval, bioterror and cyber-attacks, natural disasters, and civil breakdown. In doing so, Shall We Wake the President? will provide lessons from presidents of the past that will inform policy strategies for presidents of the future.

Tevi Troy is the founding president of the American Health Policy Institute, a former Deputy Secretary of the U.S. Department of Health and Human Services, and a best-selling presidential historian. He is a frequent television and radio analyst, and has appeared on CNN, Fox News, Fox Business, CNBC, C-SPAN and The News Hour, among other outlets.

On August 3, 2007, Dr. Troy was unanimously confirmed by the U.S. Senate as the Deputy Secretary of the U.S. Department of Health and Human Services. As Deputy Secretary, Dr. Troy was the chief operating officer of the largest civilian department in the federal government, with a budget of $716 billion and over 67,000 employees. In that position, he oversaw all operations, including Medicare, Medicaid, public health, medical research, food and drug safety, and disaster preparedness. He served as the regulatory policy officer for HHS, overseeing the development and approval of all HHS regulations and significant guidance. In addition, he led a number of initiatives at HHS, including combating bio-terrorism and public health emergency preparedness.

Dr. Troy has extensive White House experience, having served in several high-level positions over a five-year period, culminating in his service as Deputy Assistant and then Acting Assistant to the President for Domestic Policy. At the White House, Dr. Troy also specialized in crisis management, creating intra-governmental consensus, and all aspects of policy development, including strategy, outreach and coalition building.

Dr. Troy has held high-level positions on Capitol Hill as well. From 1998 to 2000, Dr. Troy served as the Policy Director for Senator John Ashcroft. From 1996 to 1998, Troy was Senior Domestic Policy Adviser and later Domestic Policy Director for the House Policy Committee, chaired by Christopher Cox. Before serving on Capitol Hill, Dr. Troy was a Researcher at the American Enterprise Institute.

In addition to his senior level government work and health care expertise, Dr. Troy is also a presidential historian, making him one of only a handful of historians who has both studied the White House and worked there at the highest levels. His 2013 book, What Jefferson Read, Ike Watched, and Obama Tweeted: 200 Years of Popular Culture in the White House (Regnery History), was a Washington Post bestseller. Dr. Troy is also the author of Intellectuals and the American Presidency: Philosophers, Jesters, or Technicians? (Lanham: Rowman & Littlefield, 2002), and has written over 150 articles, for TheWall Street Journal, The Washington Post, Forbes, The New Republic, Commentary, Reason, Investor’s Business Daily, National Review, Washingtonian, The Weekly Standard, and other publications.

Dr. Troy has a B.S. in Industrial and Labor Relations from Cornell University and an M.A and Ph.D. in American Civilization from the University of Texas at Austin. He lives in Silver Spring, MD, with his wife Kami and four children.