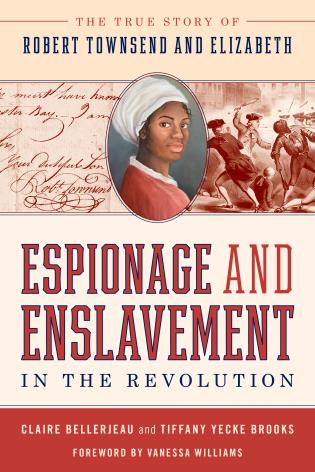 Espionage and Enslavement in the Revolution

The True Story of Robert Townsend and Elizabeth

Claire Bellerjeau currently serves as historian and director of education at Raynham Hall Museum in Oyster Bay, New York, and has been researching the Townsend family and their slaves for over sixteen years, including curating a yearlong exhibit on the Townsend “Slave Bible” in 2008. In 2015, during a research visit to the New York Historical Society, she discovered what may be one of the earliest poems ever written by Jupiter Hammon, America’s first published African American writer. She has spoken internationally and published several articles in scholarly journals about life and artifacts of colonial New York. Bellerjeau lives with her husband, Chris, in Oyster Bay, New York.

Tiffany Yecke Brooks holds a PhD in American and Dramatic Literature from Florida State University and has spoken and published widely on early portrayals of race in trans-Atlantic performance as well as the emerging American identity in the late eighteenth and early nineteenth centuries. She was the lead researcher and contributing writer for the New York Times best-selling George Washington’s Secret Six, Thomas Jefferson and the Tripoli Pirates, and Andrew Jackson and the Miracle at New Orleans, as well for Fear is a Choice with Pittsburgh Steelers running back