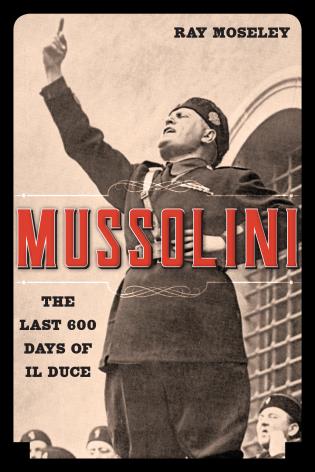 In his last days, Mussolini, the tyrant, was in the grip of anger, shame, and depression. The German armed forces that had sustained his puppet government since its creation in September 1943 were being inexorably driven out of Italy, the frontiers of his Fascist republic were shrinking daily and Mussolini was aware that German military leaders were negotiating with the Allies behind his back in neutral Switzerland. Moseley's well-researched and highly engaging tome throws light on the last twenty months of the despot's life and culminates with the dramatic capture and execution of Mussolini (and his mistress Claretta Petacci) by partisans of the Italian resistance on April 28, 1945.

Ray Moseley was the chief European correspondent of the Chicago Tribune and in 1981 was runner-up for the Pulitzer Prize in international reporting. During four decades as a foreign correspondent, he spent five years in Rome and was also based in Moscow, London, Nairobi, Berlin, Belgrade, Cairo, and Brussels. He is author of the widely acclaimed Mussolini's Shadow: The Double Life of Count Galeazzo Ciano. He lives in England.