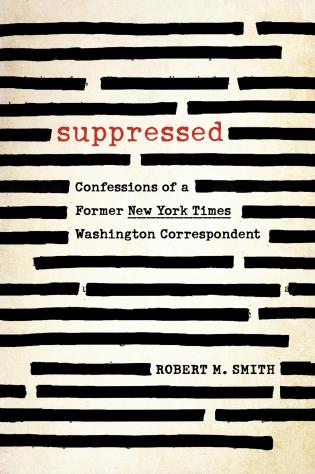 Confessions of a Correspondent

Four million people in nearly 200 countries read The New York Times. Of these, many are opinion-leaders. Journalists everywhere read the paper to get a supposedly objective view of the news and to learn what The Times thinks is important. But they aren’t getting that kind of view – no matter how many house ads The Times runs proclaiming its attachment to rock-solid truth. A Times former White House and investigative correspondent, Robert M. Smith, discloses in Suppressed: Confessions of a Correspondent how some stories make it to print, some do not, how the filters work, and how the paper may have suppressed the most important U.S. political story of the day—Watergate.

Smith also shows how the paper has now stepped into the ring and begun duking it out with the President, instead of staying outside the ring and neutrally reporting what it sees. The book argues that the paper would be far more effective in countering and exposing the President if it had remained true to its century-old tradition and remained neutral -- that is, remained credible (as it so loudly maintains that it is).

The book also discloses that The Times assigned Smith to hire a reporter of a particular partisan stripe; that the paper’s business journalists refused to cover negative stories about business, and that its Pentagon correspondent refused to cover the My Lai massacre committed by American troops in Vietnam.

Written with candor and humor, Suppressed traces a young investigative reporter’s arc from naïveté to cynicism, from covering the White House to leaving the paper for Yale Law School and ultimately becoming a barrister in London and teaching mediation at Oxford.

Robert M. Smith is a former New York Times White House and investigative correspondent who was witness to some of the most important stories in modern history, including Watergate, the Pentagon Papers, and the My Lai Massacre. He lives in San Francisco, CA.