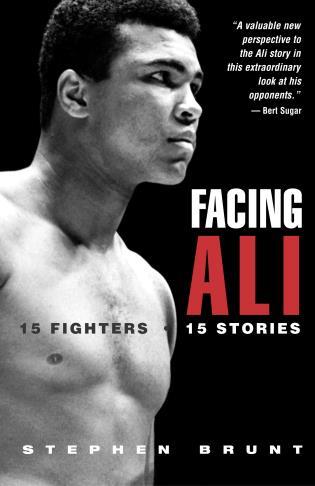 "Brunt does an excellent job of bringing his subjects out of the shadow of the Greatest, recounting their often poignant tales of life before and after their dates with the champ. In the end, of course,
we learn more about Ali. What stands out is their almost unanimous expression of affection for Ali. A worthy addition to any boxing
collection." -Library Journal
Muhammad Ali cast a blinding light on his sport, on the tumultuous times in which he reigned as champion, and on all the people who surrounded him. That included the fighters brave enough to stand alone in the ring with the greatest heavyweight champion of all time.
Ali's own story has been told often, but the tales of those who faced him have been mostly overlooked. For each, the moments alone in the ring with Ali changed their lives. Facing Ali tells the stories, in the fighters' own words, of fifteen men from around the world-from famous names like Joe Frazier, George Foreman, and Henry Cooper, to lesser lights like Tunney Hunsaker, Jergen Blin, and George Chuvalo. Facing Ali offers a unique perspective on what it was like to fight Ali, and gives new insights into the character of a boxer who is arguably the most recognized man on the planet.

Stephen Brunt is Canada's premier sportswriter and commentator. He is the lead columnist for Toronto's Globe and Mail and won the Michener Award for his piece on negligence and corruption in boxing. He was nominated for Canada's National Newspaper Award for his account of meeting with Ali.