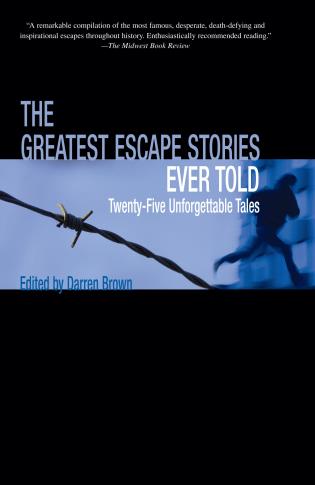 To reach freedom, the most famous escapers of all time have been willing to endure the most horrific conditions—and the direst consequences if caught. The collection of tales in The Greatest Escape Stories Ever Told is gripping as only true life-and-death struggles can be: Papillon fighting through the jungles of Guiana only to commit himself to the open ocean in a sixteen-foot boat rather than face a life in exile; Rocky Gause dodging bullets as he swims through shark-infested waters to escape the Japanese at Bataan, while those around him simply quit; Latude battling against the dreaded Bastille; Baron Trenck—with chains covering almost every inch of his body—digging and digging to free himself from wrongful imprisonment; Andre Devigny, so weak from starvation and poor treatment that he could barely lift himself, shimmying across a rope only yards above a German sentry during World War II on the eve of his execution.
These are just a few of the twenty-five bold and ingenious tales of escape included in this collection. The Greatest Escape Stories Ever Told will hold readers captive for years to come!

Before becoming a freelance writer and editor, Darren Brown was the managing editor of Wilderness Adventures Press. He has edited several short-story collections, including For the Love of a Dog and Brag Dog and Other Stories: The Best of Vereen Bell. He lives in Montana, with his wife and two bird dogs.