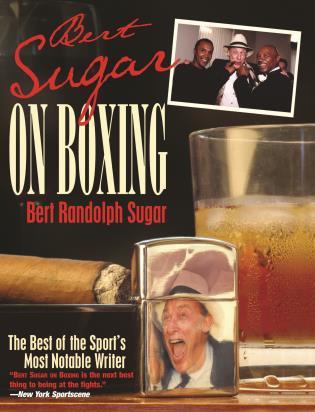 The Best Of The Sport's Most Notable Writer

"Entertaining, insightful, and eminently colorful-the next best thing to being at the fights."--New York Sportscene

". . . anyone taking a trip through the sport's hardscrabble past couldn't ask for a better guide..."--The Ring

Known as the "guru" of boxing, Bert Randolph Sugar is one of the most charismatic writers ever to capture the drama of the fight on paper. With a passion for the sport that is rivaled only by his talent for writing about it, Bert Sugar is also regarded as the "unofficial historian" of boxing. With his trademark fedora and always-handy cigar, Sugar is a guaranteed ringside presence. His colorful personality and flamboyant mannerisms are unforgettable whether you are meeting him in person or through his writing. Bert Sugar on Boxing brings out his best.

Here's but a small sampling of what awaits readers:

Many a troubled and troublesome youngster has embraced "The Sweet Science" as a way out, a social staircase out of the mean streets that formed his limited world, fighting his way, bloody hand over bloody hand, up the ladder of acceptance the only way he knows: with his fists.

You see, I was raised in a society, many moons ago, which held to two general axioms: That men were stronger; and women, smarter. And if women are so damned smart, why are they interested in having their features rearranged and acquiring cauliflower ears so pronounced they can be covered with hollandaise sauce?

I will not be dissuaded from attacking those with souls like the undersides of flat rocks any more than ice can be welded or iron melted. There is no shaking-knee factor here.

Bert Randolph Sugar, one of the most recognizable and colorful personalities in boxing, is also regarded as one of the sport's most outstanding writers and historians. He has served as the editor of The Ring, Boxing Illustrated, and Fight Game magazines, and is the author of over fifty books. He lives in Chappaqua, New York.