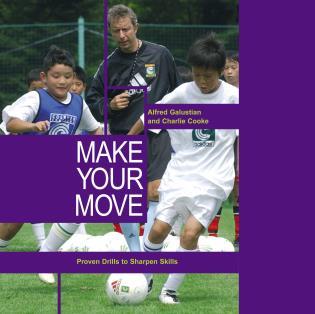 Guided by the experience and expertise of the internationally celebrated Coerver Coaching method comes the authoritative guide to mastering 1-on-1 play, one of soccer’s most important skills. MAKE YOUR MOVE is written by the cofounders of Coerver Coaching
and two international coaches. The book instructs young players and their coaches in how to execute a move by knowing which move to make, and how and when to make it.

Recommended by FIFA, Coerver Coaching is recognized as the world’s best soccer skills teaching method. MAKE YOUR MOVE groups twenty-six moves, eighteen drills, and games that Coerver Coaching uses in an at-home guide for coaches and young players
to learn and master soccer’s most expert skills. This practical and effective book is the next best thing to having a personal coach.

ALFRED GALUSTIAN began his soccer career in England with the Wimbledon
football club. After an injury ended his player career, he earned coaching licenses in both the United Kingdom and the United States. Galustian is currently the International Director of Coerver Coaching WorldWide, as well as a technical instructor with some of the world’s leading soccer clubs, including Arsenal (England), Bayern Munich (Germany), and Auxerre (France). He is also a director for the Lake Placid Soccer Center.

CHARLIE COOKE forged a long soccer career, making 360 league and cup
appearances for the Londoners, and playing in four Cup Finals to win the English
Winners Cup in 1970 and the European Winners Cup in 1971. In the U.S.,
Cooke played for the L.A. Aztecs, Memphis Rogues, and the California Surf of
the North American Soccer League, as well as coached for the Witchita Wings
in the Major Indoor Soccer League. He is currently the Director of Coerver
Coaching Schools in the U.S., and runs his own soccer school at Kids First.