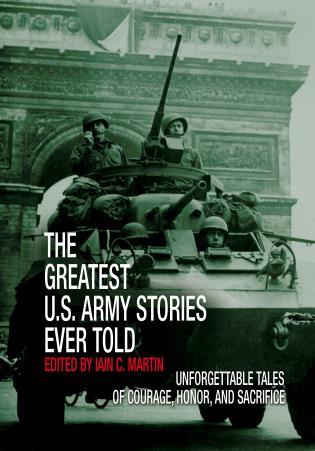 Since the United States Army's inception by an act of Congress on June 14, 1775, its remarkable service members have engaged in almost every one of the most important turning points in our nation's history. In The Greatest U.S. Army Stories Ever Told, editor Iain Martin gathers the amazing experiences of America's fighting men and women into one unforgettable collection.

Each story recounts the sights, sounds, and significance of such hallowed battlefields as Yorktown, Shiloh, and the Argonne. Watch row after row of redcoats attack during the Battle of Monmouth with eyewitness Joseph Plumb Martin. Ride a rickety boat with Washington in his famous night crossing over the Potomac. Triumph with Joshua Lawrence Chamberlain as he snatches victory from the jaws of defeat on Gettysburg's Little Round Top. Charge San Juan Hill with Theodore Roosevelt, as told by the era's most famous war correspondent, Richard Harding Davis.

This collection includes the most significant stories of the highest generals, from famous actions such as D-Day, Guadalcanal, and Inchon, as well as the most memorable experiences of the citizen soldier far from home, in such places as Landing Zone X-Ray, 73 Easting, and a spider hole somewhere north of Baghdad. Whether fighting at home or abroad, in victory or defeat, The Greatest U.S. Army Stories Ever Told shares the stories and singular experiences of these amazing individuals, and sheds new light on their courage and sacrifice.

Iain C. Martin is a freelance writer and historian, with an MA in history from Southern Connecticut State University. He lives with his family in Connecticut.